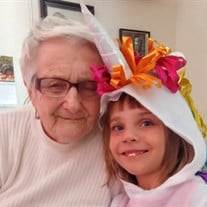 Phyllis Mary Spurgeon Massee joined her family in heaven on Tuesday morning, January 28th. She was 88 years old. She spent her last years with her granddaughter in Fort Collins Healthcare where she was incredibly loved by residents and staff alike. She was in the company of her daughter, Rose, and her granddaughter, Marcie. She was born June 7, 1931, in Colfax, Washington, to Howard and Margaret Spurgeon. She was the middle child of three. She graduated from St. Mary’s High School (Idaho), class of 1950. She studied at Sacred Heart Nursing school and became a CNA. She decided “I could never retire on this” and began her second career as a custodian for the Lewiston School District in Lewiston, Idaho. Phyllis met her husband Ralph via pen pal while he was stationed at the air force base in Kwajalein Atoll. They were married in 1951. They divorced in their later years. They raised four children, Leland, Howard, Rose and Cathy. Phyllis enjoyed outdoor activities such as camping and travel throughout her life. She collected stamps for many years and amassed a large collection. In her later years, she spent much of her time sewing doll clothes, hats and bags for the people she loved. She spent most of her later years in Mansfield, Washington in the company of many relatives, including her daughter, Cathy, granddaughter Jenei and great granddaughter Margaret. After a health incident, she relocated to Fort Collins with her grandchildren Marcie and Chris, and lived at the facility where Marcie worked as a nurse. While there she touched the lives of residents and staff alike and was well loved. Phyllis is survived by children Joanne of Richland, WA, Leland, wife Laurie, of Tucson, AZ, Rose of Tucson, AZ, and Cathy, significant other Randy, of Mansfield, WA. Grandchildren Marcie, husband Ronald, of Fort Collins, CO, Christopher of Greeley, CO, and Jenei of Mansfield, WA. Great grandchildren Tarlin, wife Amanda, of Loveland, CO, Michelle of Spokane, WA, Taylor of Moscow, Idaho, Taren of Canon City, CO and Margaret of Mansfield, Wa. Great-great grandchild Aerabella of Loveland, CO. She was preceded in death by her parents, step-parents and husband as well as her brother, Alvin, her son, Howard and sister Elaine. A small memorial for local friends and family, staff and residents will be held Friday, January 31 at 2p at Fort Collins Healthcare Center in Fort Collins, CO. A larger celebration of life will be held in the spring in Mansfield, WA.

Phyllis Mary Spurgeon Massee joined her family in heaven on Tuesday morning, January 28th. She was 88 years old. She spent her last years with her granddaughter in Fort Collins Healthcare where she was incredibly loved by residents and staff... View Obituary & Service Information

The family of Phyllis Massee created this Life Tributes page to make it easy to share your memories.

Send flowers to the Massee family.