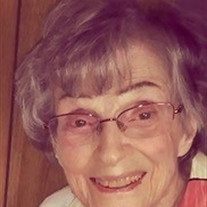 Phyllis Kovac (née Reyburn) peacefully went to meet her maker on October 5, 2019, at the “youthful spirited” age of 99. She was born to parents Albert and Myrna Reyburn (née Smith) on April 25, 1920, in Eaton, Colorado. She grew up as the second of three children and graduated from Loveland High School. She attended Southwestern Bible School in Enid, Oklahoma. It was there that she met her handsome, never meet a stranger - life partner, Nicholas Kovac. They married June 15, 1941. She followed her beloved husband to Richmond, VA, as the U. S. Army became their focus during WWII. When Nick shipped off to Burma she returned to live with her mother in Loveland. They were proud parents of two daughters: Beverly Ann (deceased) and Gwendolyn of Fort Collins, Colorado. She was preceded in death by her sister Barbara Ellen Pegau and brother William D. Reyburn. Phyllis had never lived beyond West Fifth Street in Loveland until she was 21. Marriage to her dashing husband took her to Mississippi, Virginia, Texas, Wyoming, and New Mexico. In 1974 they returned to Fort Collins to become caretakers of her mother who was convalescing after a stroke. Phyllis retired December 31, 1988, after 13 years and 9 months working among life long friends at East Larimer County Water District and Boxelder Sanitation District. She continued to work for manager Bob Reed at Soldier Canyon Water Treatment Plant from 1989-1995. Her husband passed away June 1990 and her daughter left in August that same year to serve in missions in Guatemala. Up until her husband’s death in 1990, she accompanied him in his pastorate of a loving congregation of the Wellington Assembly of God church. After the loss of her best friend and partner she returned to her mother’s church where she has been a faithful member of Timberline Church since 1990. For twenty years she happily greeted those who attended the 11:30 AM service at Timberline Church. Phyllis loved to study and meet people of other cultures. In her travels she interacted with the Tarahumaras, Quiches, Q'eqchi, Kaqchikeles, Shipibos, Quechuas, etc. In the mid eighties she and Gwendolyn toured Peru from Lima to Macchu Picchu to Pisac to Iquitos and the Amazon jungle. In the late eighties she and Gwendolyn made the Copper Canyon Train trip from Chihuahua to Los Mochis and the Pacific Ocean. She accompanied various medical teams to Guatemala plus made personal visits to her daughter. Her favorite touristic place always remained as Cuzco, Peru. Her last trip to Peru and the Amazon area of the Shipibos was at the age of 87. June 2014 marks her health decline. Phyllis graduated two times from Halcyon Hospice and was briefly served by her team a third time. They professionally and lovingly cared for her until her death. Eating was not one of her favorite past times but she was always grateful for the well-prepared food and the visiting volunteers of Meal on Wheels. Her last days on earth were spent in her own bed with a pleasant atmosphere of visits from friends of the years after returning to the Rocky Mountains. The positive dreamlike flutter of angel wings seemed to surround her home going. Her celebration of life service is scheduled for Tuesday, October 15, 2019, at 12:00 PM (Noon) at Timberline Church, South Auditorium, 2908 S. Timberline, Fort Collins, Colorado. One of her delights since 1990 has been to watch a favorite little boy from Albuquerque rise up to become her own beloved minister. He is Rev. Dary Northrop and will be officiating the service. All are welcome to attend and celebrate Phyllis’ life. Reception will follow. In lieu of flowers please give your donation to Timberline Church. That donation is designated to bless the creative leadership of Pastor Darell and Deon Hailey in Royal Family Kids. Interment will be later that afternoon at 3:30 PM at Grandview Cemetery, 1900 W. Mountain Ave., Fort Collins, Colorado. Interment will be officiated by Pastor Darell Hailey and Pastor Kari Stewart.

The family of Phyllis G. Kovac created this Life Tributes page to make it easy to share your memories.

Send flowers to the Kovac family.