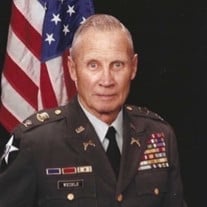 Colonel (ret.) Oscar Joseph Weible, 97, died on April 28, 2020 at 7:13pm at his home in Fort Collins, CO, surrounded by his loving family. He is survived by his wife Laura; five children, Robert Weible (Brenda), Richard Weible (Cherie), Sandra Wolff (Evan), Patricia Weible, and Pamela Sunderman (Steve); as well as nine grandchildren, Kyle Weible, Joseph Weible, Nicole Weible, Johnathan Weible, Victoria Hashiguchi, Christopher Weible, Haley Jacks, Amanda Weible-Deutsch, and John Oscar (Jack) Cragg and his sister, Viola. Oscar is preceded in death by his father Otis; his mother Ida; and his four siblings, Victor, Bob, Ella Mae, and Ethel. Colonel Weible was a highly decorated veteran of WWII, the Korean War and Vietnam. He was the holder of more than 20 US and foreign awards and decorations including the Legion of Merit with two oak leaf clusters, a Bronze Star for valor during the Korean War, an Army commendation medal, an Air medal, and the Purple Heart. He was inducted into the US Army Officer Candidate School Hall of Fame at Fort Benning, GA in 1999. Following graduation from high school in 1943, Oscar immediately volunteered for induction into the US Army. After finishing basic training at Camp Roberts, California, he was assigned to the 10th Mountain Infantry Division at Camp Hale, Colorado. Oscar was commissioned as a 2nd Lt. in the infantry during WWII and served in the Korean War as a platoon leader and company commander with the second Infantry Division. After attending the Military Police school, he transferred his branch to the Military Police Corps. During his 32 years of service he held a wide variety of command and staff assignments both state side and overseas. He graduated from the University of Nebraska in Omaha with a degree in Education and then went on to finish his Masters in Military Science at the US Army Command and General Staff College. Following his retirement in 1975, Oscar was actively involved in the 4-H horse program with his daughter Patty, and in gymnastics with his daughter Pam. He was also deeply involved in the Education Opportunity Foundation of Black Forest for many years. Colonel Weible was a lifetime member of the National Military Officers Association of America as well as a member of the local Pikes Peak chapter. He was a member of the ORBS and the Silver Spruce Golf Club. Colonel Weible always enjoyed athletics. He was by nature a quiet unassuming person while at the same time could be very intense and competitive. He was an avid golfer and shot his age or better on the golf course every year since he was 71 years old until he stopped playing golf at the age of 94. The Memorial service will be Thursday, August 6, 2020 at 3PM at Timberline Church - Windsor, 360 Crossroads Blvd., Windsor, CO 80550 Reception immediately following the service at the home of Steve and Pam Sunderman, 607 Castle Ridge Court, Fort Collins, CO 80525 He will be laid to rest at Fort Logan National Cemetery in Denver, Colorado. In lieu of flowers, we request donations in his honor be made to the Education Opportunity Foundation of the Black Forest at eofblackforest.org.

The family of Oscar Joseph Weible created this Life Tributes page to make it easy to share your memories.

Send flowers to the Weible family.