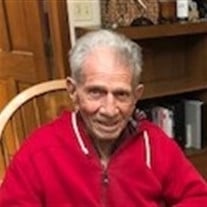 Oliver Henry Busetti passed away on November 5, 2020 in Fort Collins, Colorado. He was born on January 8, 1925 in Pylorite, aka Radiant, Colorado to Oreste and Josephine (Menapace) Busetti. He was the second of four children. Between the ages of 15 and 17 he supported his family by staying on the family ranch approximately 7 miles outside of Coal Creek by himself caring for 35 head of cattle while his brother and father worked in the coal mines. On July 6, 1943 he enlisted in the Army/Airforce. He served his country with pride and honor during World War II in the battles and campaigns of Normandy, Northern France, Ardennes, Rhineland and in the Central Europe Air Offensive. He returned home from the military on December 8, 1945. He moved to California where he worked at the US Naval Air Station until that facility closed. After the facility closed he moved back to Colorado. After working on aircraft during the war (B-26, A-24 and A-26) he really enjoyed planes and he obtained his pilots license. Upon returning to Colorado he met and married his wife, Margaret (Knisley) on June 12, 1948. They had one daughter (Debbie). They made their home in Coal Creek, Colorado. Oliver worked at Portland Cement Company for 35 years working his way up to a master machinist and shop foreman before retiring. He lived in Coal Creek for more than 60 years and during that time he served on the town board and also the Volunteer Fire Department for more than 20 years. He was also very active in his church, St Patrick's in Rockvale, Colorado. When St Patrick's was closed he began attending St Benedicts in Florence, Colorado. In December of 2015 he moved to Fort Collins to be closer to his daughter. Even though he was 90 years old he still helped with the construction of a mountain cabin. He loved to work and always said the cabin reminded him of his time spent on his family's ranch. He would never say he did not want to go to the cabin. Oliver loved his family. He is survived by his daughter, Debbie (Lee), two grandchildren, Aric Jorgenson (Elizabeth) and Alyssa Moffatt (John) and also four great grandsons, Oliver, Logan, Bentham and Darwin. He is and will always be loved deeply. Funeral Services will be held on November 19, 2020 at 10am at St Benedicts Catholic Church in Florence, Colorado. A Graveside Service at Union Highland Cemetery in Florence, Colorado will follow. Arrangements are being handled by Bohlender Funeral Chapel, 121 W. Olive St, Fort Collins, CO. In lieu of flowers contributions may be made to Good Samaritan Society Fort Collins Village or Suncrest Hospice in his honor.

Oliver Henry Busetti passed away on November 5, 2020 in Fort Collins, Colorado. He was born on January 8, 1925 in Pylorite, aka Radiant, Colorado to Oreste and Josephine (Menapace) Busetti. He was the second of four children. Between the... View Obituary & Service Information

The family of Oliver Henry Busetti created this Life Tributes page to make it easy to share your memories.

Send flowers to the Busetti family.