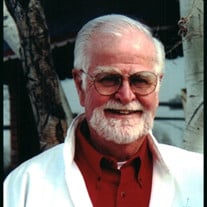 “Not a sparrow falls to the ground without your Father’s knowledge…” Matthew 10:29 Norman Benson Oliphant, 97, was received into God’s glory on November 26, 2021 at his home in Windsor, Colorado surrounded by love. Memorial services will be held at 10:00 a.m., Monday, December 13, 2021, at Redeemer Lutheran Church, 7755 Greenstone Trail, Fort Collins, Colorado. The service will be live streamed at https:live.redeemerconnect.com/ for those who are unable to attend. Born September 25, 1924 to Willis C. and Winona Benson Oliphant at North Platte, Nebraska., Norman was the youngest of seven children. Shortly after graduating from North Platte High School he entered the U S Navy Seabees attached to the Marines and served in the Asiatic Pacific until his discharge on March 29, 1946. At that time, he returned to North Platte and began working for Coca-Cola Foods Division, traveling throughout western Nebraska. The Butter-Nut line of foods, particularly Butter-Nut Coffee and Hi-C, were the primary products he supplied for his retail customers. Norm’s career with Coca-Cola Foods later evolved into the position of District Sales Manager for the Omaha and Kansas City divisions. Norm married Dorothy Loebsack June 13, 1947 at North Platte. Together they raised their beloved son, David. After a long career with Coca-Cola Foods, Norm retired in 1985. Tragically he lost Dorothy shortly after retirement. He married Marcia Miller February 14, 1987 at North Platte. They made their home at North Platte, Phoenix and Fort Collins/Windsor, CO. Norm had a never ending love for people, nature and animals. Anyone who met Norm instantly loved him back. Humble by nature, he always put others first. Day trading the stock market was a huge part of Norm’s life, however his lifetime dream was to become an artist. Multiple life experiences prevented fulfillment of that dream until late in life. As a self-taught painter he created many incredible pieces of work. Norm called himself “the ancient artist.” His retirement years finally given him the opportunity to enjoy his childhood dream. Norm is preceded in death by his parents, six siblings, first wife Dorothy and son David. He is survived by his wife Marcia, stepson Don McKenzie, grandson Norm (Tara) Oliphant, granddaughter Gretchen (John) Pearce , great-grandson Jaxon, daughter-in-law Vicky, brothers and sisters-in-law Gregg (Pam) Dahlheim, Roxie (Scott) Austin, Denise (Scot) Hirsch, and many nieces and nephews. In lieu of flowers, to please consider contributing to Doctors Without Borders c/o Bohlender Funeral Chapel, 121 West Olive, Fort Collins, CO 80524

The family of Norman Benson Oliphant created this Life Tributes page to make it easy to share your memories.

“Not a sparrow falls to the ground without your Father’s knowledge…”...

Send flowers to the Oliphant family.