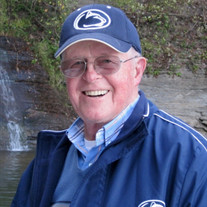 Norman (Norm) Edward Brown passed away on June 14, 2021 at the age of 89. He was born to Charles E. and Ethel Mae Brown in Conklin, New York on February 8, 1932. Two years later, his family moved to Brown family farm along the banks of Williams Pond in Montrose, PA. The farm has been owned by the Brown family since 1860. Norm and his dad farmed with horses and milked cows by hand. Norm attended a one-room 8 grade country school across the pond from his house. During winters, he would skate to school after ice covered the pond, and at lunch time, the kids would climb the hill outside the school and sled back to school. Norm attended high school in Montrose. PA. After high school graduation, Norm received a Senatorial Scholarship to Penn State. He enrolled in Air Force ROTC program, and while at Penn State, Norm received a varsity letter as First Assistant Basketball Manager. After receiving his BS in Dairy Husbandry in 1954, Norm was commissioned as Second Lieutenant in the Air Force. He was stationed in Florida. After 2 years, he was offered relief from active duty as there was “no conflict”. He continued in the Air Force Reserves until 1976 receiving an honorable discharge as a major. Upon completion of his active duty, Norm became an Extension Agent in Clearfield County, PA. After 6 years, Norm went to Colorado where he received his M. Ed. in Extension Education and got married. Norm and Donna moved back to Clearfield County where they had 2 children, Russell and Trisha. Later, Norm was offered a position in Jefferson County. In addition to his work as a county agent, Norm was the horse show announcer at the Keystone International from 1969- 1973. He announced the horse pulling contest at PA State Farm Show 73-74. Later, Norm and his family moved to Wellington, Colorado where they helped Donna’s mother (Marie) run her farm. They took over all farm operations after Marie’s death in 1999. Norm continued to work as a county agent, this time in Adams and Larimer counties. Eventually, he became County Extension Director in Adams County, a post that he held for 6 years before his retirement in 1987. His career in extension was distinguished with numerous awards including the Distinguished Service from the National County Agents Association. After his retirement, Norm worked as an agricultural consultant. His biggest client was Rabobank. He also took the lead role in running the farm in Wellington which he continued to do up until his death. While in Pennsylvania, Norm and Donna bred their two Arabian mares and they continued to breed Arabians in Colorado. Norm and Donna were the first husband and wife team to be presidents of The Colorado Arabian Club (Norm in 1977 and Donna 1981-83). Norm primarily showed Arabians at halter, and in 1975, he showed Marie’s Arabian mare to a Top Five at the Arabian Region 8 Championships. In 2011, Norm completed a Century Club Ride on Trisha’s Arabian gelding Amie Phoenix+. This enabled him to be the 88th horse and rider team to join this prestigious list (where the age of horse and rider total at least 100 years). Norm was also active in the Colorado Horse Council (CHC), a founding member of the Rocky Mountain Horse Expo, an original board member of the Colorado Horse Development Authority, and on the management team of the Western National 4H Horse Classic. While Norma was a leader in CHC, the state legislature passed the Equine Liability law and Hold Your Next Horse Show in Colorado (the first guide of horse show facilities in the state) was published. These and other achievements led to Norm being named the Colorado Horse Person of the Year (1995) and Lifetime Achievement award in 2013. After Norm’s parents passed away, he inherited the family farm in Montrose, PA. Russ now owns the farm, continuing the 160 year old family ownership. Norm was well-known as an avid Penn State sports fan, and he perfected his trademark technique of yelling at the TV ensuring his part to ensure a Penn State victory. His love of sports permeated his life , from swimming and diving in Williams Pond as child and teen, trying out for the New York Yankees as a young adult, surfing the Atlantic while in the Air Force, to running 5K races with his daughter in his mid-50’s. Later in life, he enjoyed attending collegiate wrestling matches with Russ, basketball and volleyball games with Donna, and bluegrass concerts with Trish. He was also well-known for his skills of irrigating, tractor driving, and being a beer aficionado. Norm is survived by his loving wife Donna; his two children Russ (Jackie Meier) and Trisha who were the apples of his eyes; his sister-in-law Jeannette (Nico Bink) as well as countless people to whom he was a mentor and second father. He was proceeded in death by his parents Charlie and Ethel; his brother Kenneth; and his daughter-in-law Aadria. In lieu of flowers or donations, the family would appreciate your support of the Norman and Donna Brown Mountain View Arabians Scholarship in the College of Agricultural Sciences at Penn State. Gifts may be written out to “Penn State University” with “Norm Brown scholarship” in the memo and mailed to: College of Agricultural Sciences, 240 Ag Administration Bldg., University Park, PA 16802. The celebration of life (“Norm Fest”) will take place later this summer. Contact the family for additional details.

Norman (Norm) Edward Brown passed away on June 14, 2021 at the age of 89. He was born to Charles E. and Ethel Mae Brown in Conklin, New York on February 8, 1932. Two years later, his family moved to Brown family farm along the banks of Williams... View Obituary & Service Information

The family of Norman Edward Brown created this Life Tributes page to make it easy to share your memories.

Send flowers to the Brown family.