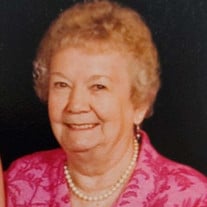 Norma E. Mayhak, April 16, 1934 – September 14, 2021 Fort Collins – Norma E. Mayhak, 87, died September 14, 2021, at UC Health Poudre Valley Memorial Hospital. She was born April 16, 1934, in Calumet, Michigan, on the Upper Peninsula. The daughter of Emil and Eva Hendrickson, she had five sisters and twin Brothers. Later, the Hendrickson family, moved from Michigan south, to Zion, Illinois. Norma attended and graduated from Zion-Benton High School. She met Paul Mayhak in high school and upon graduation she and Paul were married. These two High School sweethearts jumped in a model A Ford, and spent their honeymoon driving to Fort Collins where they have spent the last 69 years together. Norma was a skilled homemaker who sewed and loved to bake. She made delicious pies and cakes, never had an empty cookie jar, and often had a warm pot of coffee ready. Norma was a good and faithful servant to her Lord and Savior, Jesus Christ. She and Paul were members of St. John’s Lutheran Church where Norma sang in the choir for more than 15 years. Later they joined First Christian/Christ Center Community Church where Norma volunteered with the Workday Ladies, sewing and baking Kraut-burgers for their annual fundraisers. The ladies spent sweet times of fellowship together every week for many years. Over the years she attended many Bible study groups. Norma also served her community as an Election Judge. At home Norma wrote letters to family, never forgetting a Birthday, Anniversary or Holiday. Her letters were often packaged with gifts of a jar or two of her special homemade jams, jellies, and cookies. Norma led an active life with her family; they camped, fished, visited historic sites and snow skied together. As her children left home Norma became an avid hiker and once even climbed Longs Peak. She also was a fervent reader. Often completing lengthy series of historical fiction about Pioneers & Mountain Men, however, the Bible was her foundation. Norma and Paul traveled later in life enjoying the beauty of Colorado and Alaska. Every Autumn they would take a day picnic trip to the mountains to view the Aspen trees brilliant colors and listen for the elk to bugle. They enjoyed site seeing, visiting family and friends, attending Class Reunions, and returned to see Upper Michigan and Zion as well. In addition to her parents, she was predeceased by four sisters, her twin brothers, and son-in-law Clyde Dupper. Surviving in addition to her husband Paul is her sister Aggie Black of Tucson, Arizona, sister-in-law Patricia Cook of Sun City Arizona and Jolene Bice of Denver, her daughters Jody Dupper of Windsor, Kimberly Schwindt, and her husband Randy, of Fort Collins. Son, Timothy Mayhak and wife Marcelle of Kalispell, Montana. Seven Grandchildren, eight Great-Grandchildren, and numerous Nieces and Nephews. Norma touched countless lives and will be sorely missed by many! Services will be 11 am, Friday, October 8, 2021 at Timberline Church 2908 S. Timberline Road, Fort Collins. Private interment will be held at Grandview Cemetery.

The family of Norma E Mayhak created this Life Tributes page to make it easy to share your memories.

Send flowers to the Mayhak family.