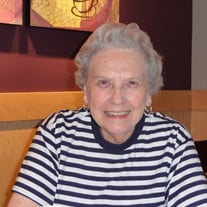 Norma Whitver Biedenharn passed away on August 28, 2019 at the age of 97. She was born in Fowler, Colorado in 1922, the youngest child of Ed and Ida Whitver. Her siblings were Ivan, Vernon and Doris (Duncan), all deceased. She is survived by her three nieces: Gabriella Duncan (married to William Marshall); Nancy Duncan, and Lara (Whitver) Sealander (Mike); great-nephews Jordan (Annie Rappeport) and Jesse (Michelle Rengarajan) Marshall; great-nieces Mikayla (Sealander) Baldwin (Amos), Cassidy, McKenna and Celia Sealander; and other family members. Norma married Vaughn Biedenharn in 1947. The two divorced in 1973. In 1932, the family moved back to Amboy, Illinois, where Norma went to Amboy Central School and was graduated from Amboy Township High School in 1940. Her chance to continue her education came early in 1943 when she entered Illinois State Normal University. She wrote, “For three years I have helped finance my college education by waiting tables in a local restaurant.” She received her B.S. degree in Education in 1946 and her M.S in Education in 1953 from that university. She also took various post-graduate courses. Career: Norma loved teaching. Her first teaching job was at a Montezuma County High School in Cortez, Colorado. Her fields were English and Social Studies. She also taught in Illinois schools at Downs Community High School in Downs; Bloomington High School in Bloomington; and Bent Junior High School (1949-59) in Bloomington. At one time she taught the course “Man and the Motor Car.” She enjoyed telling people that she taught the course without knowing how to drive. (She later learned to drive and traveled by car all over the United States.) Outside of the classroom she liked to direct high school students’ activities like dramatics or school publications. In a personal statement in 1946 she wrote, “I like people, especially young people, and enjoy working with them.” In 1959 Norma joined the staff of the Row-Peterson publishing company as “Consultant for the Secondary English Program.” Previously she co-authored the revision of the English grammar/composition textbook series for Grades 7 and 8, Building Better English , which was later published under the title, Basic Language I and II, and revised over many years. (see also https://www.amazon.com/Basic-Language-Messages-Meanings-Teachers/dp/0065370201) She continued as “Secondary English Consultant” for Harper and Row, Publishers, and served as editor of the revision of textbooks Basic Language (grades 7-12.) After special studies in Linguistics, Norma became “Consultant in All Language Arts Programs,”(grades 1-12). She traveled throughout the United States, working with supervisors and classroom teachers, giving workshops and classroom demonstrations, making presentations to state committees and representing Harper & Row at conventions and conferences. She served in multiple capacities at state and national English teachers’ conferences serving variously as workshop director, panelist, and speaker. She further participated in National Defense Education Act (NDEA) summer workshops in several southern states. In 1984 Norma, now “Language Arts Editorial Vice-President” of Harper & Row, conducted in-service training in the field of Language Arts for Department of Defense Dependents Schools Pacific Region schools in Japan, the Philippines and Korea. She retired in 1986. Before moving to Colorado Norma dutifully commuted the 100 miles nearly weekly between her home in Evanston and her father’s home in Amboy, Illinois to tend to his cooking, shopping, cleaning, laundry and other needs. He was 97 years old before he passed away in 1986. Interests Elephants and cats: Norma loved and collected elephants—mainly figurines, but also elephant jewelry, clothing, fabric, and almost anything “elephant.” Her friends and family never had trouble finding gifts for her through the years. In 1946 she had 200 elephants and her collection grew to possibly over 3,000. She loved cats as well as elephants. She adopted Pumpkin, a small orange tabby cat from a shelter and they were companions for all 20-21 years of Pumpkin’s life. England: In 1975 and 1977 Norma traveled to England to study Arthurian lore, and for many of the 30 years following pursued summer study programs at Oxford University. She became close friends with several people in one program and they, the “Oxford Group” have kept in contact over the years, sometimes having reunions between trips to England. She loved to travel and visited many other countries as well. Colorado: Norma loved Colorado and after retirement moved to Fort Collins in 1987. She soon joined a “Welcome Wagon” group in order to get acquainted with the people and activities in the community. Those in that group got along so well that they continued meeting together from time to time and remained friends through the years. Norma learned to play bridge and was active in bridge groups Fort Collins. She also was in quilting groups, book clubs and other social activities. A long-term member of the American Association of University Women, she continued her AAUW involvement in Fort Collins and was recognized along with two other women on being 90-years-old and still active in the organization. She was well known for her hospitality, often hosting some of the social groups at her home with delicious meals and mouth-watering desserts. One friend wrote, “Norma had great freedom being able to drive for decades and she was always the first one to arrive (at AAUW meetings) with a delightful food item.” Thank You! Members of Norma’s family are very grateful for the loving care Norma received in in the last few years from the staff at The Winslow, New Mercer Commons, Pathways Palliative Care, Pathways Hospice care, Columbine Health Systems, Caring Senior Services and the Centre Avenue Health and Rehabilitation Facility. Many of her friends kept in touch with her and brought her joy. We in the family say, “Thank you all so much!” The world needs more people like Norma. We will miss her greatly. Memorials in her honor can be sent to: AAUW Fort Collins Branch Scholarship Fund for CSU Bound PSD Senior Graduates 2700 Chaparral Drive Fort Collins, CO 80526

Norma Whitver Biedenharn passed away on August 28, 2019 at the age of 97. She was born in Fowler, Colorado in 1922, the youngest child of Ed and Ida Whitver. Her siblings were Ivan, Vernon and Doris (Duncan), all deceased. She is survived by... View Obituary & Service Information

The family of Norma W. Biedenharn created this Life Tributes page to make it easy to share your memories.

Send flowers to the Biedenharn family.