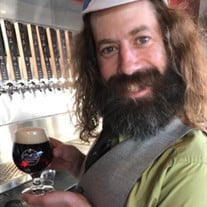 Nathaniel Glenn Jones, 40 of Fort Collins, Colorado passed away April 16, 2022 due to side effects of a traumatic brain injury he suffered in 2018. Nathan was born in Irving, Texas to Glenn and Carol Jones on April 7, 1982. The Jones family moved to Monroe City, Missouri the following year where Nathan grew up and graduated from Monroe City High School in 2000. After graduation he lived in Springfield and Columbia Missouri, but he had a dream to live near the mountains. So, in 2007, he loaded up his car and headed to a town he heard great things about – Ft Collins, CO – a place he had never been to, knew no one, had no job or place to stay. Being a resourceful and friendly guy, he quickly found a home, job, and many friends. He truly loved Ft Collins, its people, and all the natural beauty northern Colorado had to offer. He discovered his love for biking and the biking community in Ft Collins, participating in events such as Tour de Fat, Bike to Work Day, and full moon midnight rides and was on the cover of the Ft Collins Ride magazine. Nathan also loved his vinyl records, spinning R L Burnside and other blues music in addition to some Hall and Oates. He was an avid St Louis Cardinals and University of Missouri Tigers football and basketball fan. He enjoyed the Poudre River, but his special place was camping near Pingree Park that he called his “church”. He was known for his quick smile and his kind and generous spirit. Nathan was preceded in death by his grandparents, Emil (Bob) Wegs, Lovetta Fagin, and Glenn Jones Sr., and two golden retrievers Molly 1 and Daisy. He is survived by his parents, Glenn and Carol of Moberly, MO, grandmother Lois Wegs of Moberly, MO, special great-aunt Helen Wegs of Columbia MO, aunts and uncles Chris and Juanita Wegs of Moberly MO, Debbie Wegs of Orrick MO, Scott and Joy Wegs of Lakewood CO, Terrance and Terri Fagin of Bevier MO, Stacey Minor of Des Moines IA, Nancy Brown of Brookfield MO, and Vickie Gorham of Macon MO, special second cousins Bob and Jackie Gipson of Moberly MO, several special cousins, and his golden retriever Molly 2. A Celebration of Life will be held in June at Maxline Brewing in Ft Collins in conjunction with an auction of Nathan’s peditaxi and some of his bike collection where the proceeds will be donated to the Ft Collins Bike Co-Op. Follow Maxline Brewing's facebook page for details. His beloved Toyota Tacoma “Cindy Lou” was donated to the Ft Collins Habitat for Humanity. Expessions of sympathy may be made in a donation in Nathan’s memory to Ft Collins Bike Co-Op, 1501 N College Ave, Ft Collins CO 80524 (fcbikecoop.org), or Ft Collins Habitat for Humanity 4001 S Taft Hill Rd, Ft Collins CO 80526 (fortcollinshabitat.org), or charity of donor’s choice. We are so proud of the fact that you were not afraid to be your own person and followed your dreams. Fly high with your Red Tail Hawks, kick back with your vinyl tunes and enjoy your beloved mountains in the sky. And in Nathan’s words: Live A Little!

Nathaniel Glenn Jones, 40 of Fort Collins, Colorado passed away April 16, 2022 due to side effects of a traumatic brain injury he suffered in 2018. Nathan was born in Irving, Texas to Glenn and Carol Jones on April 7, 1982. The Jones family... View Obituary & Service Information

The family of Nathaniel Glenn Jones created this Life Tributes page to make it easy to share your memories.

Send flowers to the Jones family.