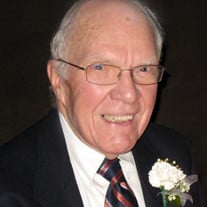 Nathan (Nate) William Stiewig passed peacefully on December 27, 2021 at his home in Fort Collins, Colorado, with family by his side. He was 97. Nate was born in Roseburg, Oregon and was the only son of Charles William (Bill) and Clara Ospald Stiewig. He was preceded in death by his wife of over 66 years, Katherine (Kay) Giles Stiewig. Nate is survived by their three children, William (Mary), Ann (David) and Linda (Bruce), and three grandchildren, Julie (Kevin) and Shelby and Alex. He was a devoted husband, father and grandfather. Nate grew up in Roseburg, Oregon graduating from Roseburg High School. He enlisted in the Enlisted Reserve Corps and was called to active duty with the US Army in World War II, ultimately serving in the China/Burma/India theatre as a medical technician. After serving in WWII, he attended the University of Oregon, graduating with a Bachelor of Science Degree and an honorary degree in Accounting. After graduating from University of Oregon he married Kay and joined the United States Weather Bureau shortly thereafter. Nate and Kay moved frequently during his time with the Weather Bureau, living in Burns, Oregon; Kalispell and Whitefish, Montana; and Salt Lake City, Utah before moving to the Washington, DC area, where his son William and daughter Ann were born. While in Washington, DC, Nate earned his Master’s Degree in Business Administration at George Washington University. In the 60’s the United States Department of Commerce consolidated various scientific efforts and the Weather Bureau, Coast and Geodetic Survey, and the National Bureau of Standards were brought together under a new parent agency – the Environmental Science Services Administration (ESSA). Nate’s role at ESSA brought him to Boulder, CO where later his daughter Linda was born. ESSA operated until the 70’s when it was replaced by the National Oceanic and Atmospheric Administration (NOAA). Nate retired from NOAA and created a second career working at the Rocky Mountain Eye Foundation and (then-novel) Ambulatory Surgery Center in Boulder, Colorado. Nate and Kay resided in Boulder for over 40 years before moving to Fort Collins, Colorado. Family was always high priority to Nate. He made a point to create a photographic legacy for the family through 35mm slides. Nate was a baseball aficionado. He would attend the then Washington Senators games in the Washington DC area and the minor league games in Denver (Bears, then Zephyrs) after coming to Colorado. He and Kay had supported the petition to bring major league baseball to Denver, Colorado and he and the family held season tickets to the Colorado Rockies and regularly attended games both at Mile High Stadium and Coors Field, including the opening day in 1993. He was also an avid supporter of the baseball games of his children and grandchildren’s teams. Playing the piano was a favorite pastime for Nate. He played piano – and guitar – in a local Roseburg, Oregon jazz band and, like with baseball, enjoyed attending the piano and other instrumental recitals and events of his children and grandchildren. Nate also enjoyed rooting for the Oregon Ducks, even attending their football games in later years in Boulder, Colorado and at the Air Force Academy in Colorado Springs, Colorado. Nate always loved trains and this enthusiasm merged with his passion for observing weather and weather patterns along with his concern for the environment and for overcrowding on the highways; even well into his 90’s he was writing letters to government officials in support of trains, especially for the Colorado Front Range Passenger Rail system. A family cabin on the West Coast was an annual vacation destination for the family and in retirement it became Nate and Kay’s summer-time destination. They enjoyed the train trips to and from the West Coast from Colorado to journey there, as well as taking the train to visit other locations in the United States. Several years ago, Nate flew on the Northern Colorado Honor Flight (now High Plains Honor Flight). On this mission, Nate’s group was invited to participate in special ceremonies to commemorate VE-Day, both at the WWII memorial and at the White House, where he was especially honored to meet the Vice President and shake his hand. There will be no formal service in Fort Collins, Colorado. A celebration of life will be held at a later date in Roseburg, Oregon. In lieu of flowers, the family requests that donations be made in Nate’s honor to the Rail Passengers Association (formerly National Association of Rail Passengers), 1200 G Street NW, Suite 240, Washington, DC 20005 or to High Plains Honor Flight, P.O. Box 363, Ault, CO 80610.

Nathan (Nate) William Stiewig passed peacefully on December 27, 2021 at his home in Fort Collins, Colorado, with family by his side. He was 97. Nate was born in Roseburg, Oregon and was the only son of Charles William (Bill) and Clara Ospald... View Obituary & Service Information

The family of Nathan William Stiewig created this Life Tributes page to make it easy to share your memories.

Send flowers to the Stiewig family.