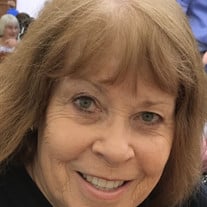 Nance Ferguson Horowitz passed away of a sudden brain aneurism at Medical Center of the Rockies on April 7, 2022. She was born January 8, 1947, in Milwaukee, Wisconsin, daughter of Earl Ferguson and Laverne Miske of Wauwatosa, Milwaukee. She is survived by her husband, Mark Horowitz, son Nathan Rosnow of Bellevue, Washington and Kathyn Rosnow Nadler of Brookfield, Milwaukee. She has three grandchildren, Hannah Marie Eckl, of Madison, Wisconsin, Robert Rosnow and Jonathan Rosnow of Bellvue, Washington, and two sisters, Carol Jung Ferguson, Madison, Wisconsin and Anne Marie Ferguson Port Townsend, Washington. She leaves behind her beloved cat, Sukothai. Nance received her BA and MA in Social Work from the University of Wisconsin and practiced Psychotherapy at the Lighthouse Clinic Milwaukee and St Luke’s Hospital. Nance married Mark, her second husband, on September 15, 2007, and moved to Colorado, a state she cherished after working at a guest ranch in Rocky Mountain National Park during summers in college. She established a private psychotherapy practice in Old Town and was on the trauma team at the Medical Center of the Rockies. A second marriage for both, they reveled in traveling. After their honeymoon in Maine, they traveled in Nova Scotia, Prince Edward Island and New Brunswick, enjoying the Irish and Scottish music Nance loved. They continued travels throughout Colorado and the world: Galapagos, Peru, Indonesia, Ireland, the UK, Iceland, France, Slovenia, Czech Republic, China, Pakistan, Italy, Romania, Laos, Thailand, Vietnam, Mexico and Philippines. Eschewing group travel, Nance reveled in staying in out of the way places. Nance was enamored of architecture, and in Milwaukee, built a Frank Lloyd Wright home in Brookfield doing much of the work herself. When she met Mark, who dreamed of building a passive solar house, they embarked on a two-year project to design and build their house North of Fort Collins, where they lived for 11 years. Nance and Mark were involved with the international community at CSU, being homestay hosts to students from Pakistan and India. Nance was a lifelong member of the Unitarian Universalist Church and served on the Board of Directors of Namaqua Unitarian Church Loveland. Nance was an avid reader and a member of two book clubs and a Buddhist Sangha group. She loved to cook and had over 100 cookbooks, dazzling her dinner guests with exotic dishes from around the world. Classical music was a large part of her life and attending the Fort Collins Symphony and the Bravo Music Festival in Vail. One summer, they went east and attended the summer season of the Chicago, Cleveland, Pittsburgh, Philadelphia and Boston orchestras. Social justice, equality and feminism were her sacred causes and she participated in integration rallies in high school, spent summers in Boston and Baltimore on social justice causes and marched in numerous rallies for women’s equality. A Celebration of Life will be held May 15 at 2 pm at the Namaqua Unitarian Universalist Congregation, 745 East Fifth St., Loveland. Contributions can be made to Planned Parenthood the Cobalt Abortion Fund of Denver.

Nance Ferguson Horowitz passed away of a sudden brain aneurism at Medical Center of the Rockies on April 7, 2022. She was born January 8, 1947, in Milwaukee, Wisconsin, daughter of Earl Ferguson and Laverne Miske of Wauwatosa, Milwaukee. She... View Obituary & Service Information

The family of Nance Ferguson Horowitz created this Life Tributes page to make it easy to share your memories.

Nance Ferguson Horowitz passed away of a sudden brain aneurism...

Send flowers to the Horowitz family.