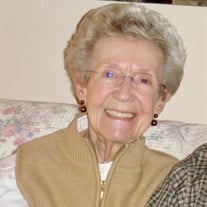 Myrtle Louise Batch, age 90 of Fort Collins, died peacefully on April 11, 2021 at Morningstar Senior Living and is now in the arms of her heavenly Father. A native of Helena, Montana, Myrt was born on September 19, 1930. "Myrt", as she was always known by family and friends, was the youngest of three children of Wesley and Ora Duncan of Helena. She recalled her father's warehouse being destroyed in the 1935 earthquakes, while older brother, Phil, was in the hospital with typhoid fever. Her dad rushed there, fearing the hospital would collapse, took Phil home, and the family packed up and moved to Billings, 240 miles away. Shortly afterward, a flood struck Billings, and her dad manned a rowboat to assist neighbors even while the basement of their own home was full of water. A move to Great Falls followed. The Duncan family returned to Helena after a short time in Great Falls; Myrt graduated with honors from Helena High School in 1948. Vocal music was a vital part of her days as a student. A gifted soprano, she was often a soloist in school events and community activities. As a senior, she declined an invitation to attend Juilliard School of Music on a full scholarship, in part due to the presence of Rae Batch, a fellow student she had invited to an ice-skating party. Following graduation, she was employed at Helena Business College, then at Galusha, Higgins and Galusha, Certified Public Accountants. Her work there focused on The Yellowstone Park Company, clients of the firm. In her early teens, she had become her father's hunting partner while brother Phil was serving in the Navy. Myrt hunted deer and elk with her dad, sleeping in the bed of an old Dodge truck, remembering that her dad heated rocks over the campfire to warm her sleeping bag. Hunting and fishing and love of the outdoors were a life-long love and treasured experience. On June 7, 1953, Myrt and Rae were married at St. Paul's Methodist Church in Helena. Daughter, Carol Rhae was born in Glendive, Montana, in 1954; son, Steven Kent in Helena in 1958. As "telephone company gypsies", Myrt lost count of the number of moves, which included living in Great Falls, Glasgow, Billings, Miles City, Helena, and Missoula. She returned to Galusha, Higgins and Galusha on a part-time basis while in Helena and there, declined an invitation by the firm to attend a university on a business/accounting scholarship, preferring to be a stay-at-home Mom to Carol Rhae and Steve. In June 1967, the family moved to Golden, Colorado. As members of Applewood United Methodist Church, they were active in children's and youth activities, and Myrt often assisted in the office. With children grown, Carol married and living in ldana, Kansas, and Steve at Colorado State University, Rae's promotion to District Manager, Riverton, Wyoming, in January 1978, brought about another move. The move to Riverton, Wyoming, meant small town living, and better fishing and big game hunting. There, Myrt and Rae fished the Wind River, hunted and bagged elk on Green Mountain, and "camped out" in their Terry travel trailer, enjoying the quiet of the Cowboy State. Mountain Bell became US West, and corporate reorganization necessitated another move, this time to Casper, Wyoming. Rae's business travels across Wyoming allowed Myrt and golden retriever, Gunner, time to enjoy the yard and frequent walks together. She also volunteered at First United Methodist Church. They continued camping out, loving the Buffalo area, particularly the Middle Fork of Clear Creek. In June 1989 after Rae’s retirement, the couple moved to Fort Collins, where they have since lived. Myrt took golf lessons and played with a group of younger gals, but her favorite course was Lincoln Greens. She and Rae often played the South course together, and she even bragged about driving over the lake on #9, to the applause of the foursome on the green. Second on the favorites list was the nine-hole course at Estes Park, sometimes over the water, sometimes in it. Love of the outdoors remained strong, and especially fishing at Dowdy Lake and West Lake, where, Rae said, "Myrt always caught more fish.". Together, the couple were active members at First United Methodist Church, where Myrt became "The Donut Lady", first suggesting, then bringing baked goods from local grocery stores for fellowship (Koinonia) time between Sunday worship services, a tradition which has continued. Myrt leaves husband, Rae, children Carol Rhae (Leland) Nelson, and Steve (Martha), grandchildren David Nelson, (Tiffany) Colorado Springs; Leslie (Brian) Page, Las Vegas, Nevada; Caitlin (Chad) Small, Littleton; and Mallory (Austen) Barnes, Trenton, Texas, and nine great-grandchildren. Myrt was preceded in death by her parents, sister Doris {Duncan) Mabbott and brother Phil. The family requests memorial gifts to First United Methodist Church, Fort Collins, or to Rocky Mountain Conservancy, PO Box 3100, Estes Park, CO 80517. A celebration of Myrt's life will be held at First United Methodist Church, Fort Collins, at 11:00 am on May 13. Private interment will follow the service at the church columbarium.

Myrtle Louise Batch, age 90 of Fort Collins, died peacefully on April 11, 2021 at Morningstar Senior Living and is now in the arms of her heavenly Father. A native of Helena, Montana, Myrt was born on September 19, 1930. "Myrt", as she was... View Obituary & Service Information

The family of Myrtle Louise Batch created this Life Tributes page to make it easy to share your memories.

Send flowers to the Batch family.