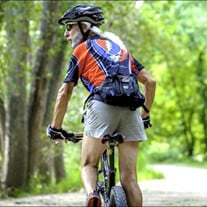 Monte Louis Barry died from metastatic thymic carcinoma on March 28, 2022, at 4:44 PM. He was with friends as his heart took its final beats in perfect rhythm to his favorite Asleep at the Wheel playlist. Monte was known by many as a real-life outdoor action figure. His home served as a base camp that was filled with camping and hiking gear. Monte shared his tents, sleeping bags, and warm boots with the homeless community when they were moved into Northside Aztlan Community Center during the corona scare in 2020. And on Saturday, April 16, 2022, at Buckingham Park in downtown Fort Collins, Monte’s wish was fulfilled as all of his base camp belongings were given to the homeless community. Local business owners shared their thoughts about Monte: Bill from The Gearage said, “Monte was one of The Gearage’s favorite patrons and will be sorely missed. Monte was a true member of the Fort Collins community, sometimes just sticking his head in and saying hi. He was so empathic, caring and engaging. We all enjoyed his stories. We will all miss that grey ponytail”. Nancy from PosterIt said, “He was such a passionate guy regarding environmental health and government behavior. I first met him in 1991 when we were pushing back against Holnam, Inc. wanting to burn hazardous waste as fuel. He was a friend of Eric Levine who was part of Concrete Facts”. Jennifer from American Family Insurance said, “I met Monte as a neighbor. We would say hello in passing and he was always friendly. We became friends and would visit at length or Monte would visit and I would listen, trying to get a word in here and there. He was so extremely intelligent that he would speak over my head at times. It wasn’t until the last few precious months that I understood his true heart. Although I feel many things were left unsaid and we will never know his true history, his pain…and what made Monte the man he was, he was a man of his word. He was a man of honor and integrity. His moral compass was true North and anything less would bring him shame and embarrassment. Always apologetic for having to ask for any kind of help and extremely grateful for the littlest of assistance. He taught me humility. I will forever be grateful for knowing him and the honor that he would call me friend”. Michael from Computer Repair by Michael said, “At first, Monte was just a neighbor of mine that I would see around the building from time to time. If you only knew him from HOA meetings, let’s just say you might have gotten the wrong impression about him. To say the least, Monte was a passionate man. As I got to know him over the years, I learned that Monte’s passion was second only to his brilliance. The man could write…and speak. And speak. And speak. And speak well, I might add. Monte’s life centered around electronics, but his pride stemmed from his days as a ‘taper’. A taper is someone who travels around recording various musical groups. Although Monte was not a typical Dead Head, many of his days were spent following the Grateful Dead. Monte said in one of his last emails to me: Please feel free to pass this stuff around. I’m proud as a peacock. And I won’t be taking this to my grave alone. Thousands and thousands of people and music enthusiasts have copies of my tapes. Now you have many of my best tapes too. Enjoy them! Thank You! I’ll see you on the other side, when the time comes. Yours truly, Monte B Cowboy Monte was a broadcast engineer. He was a technical genius and worked at numerous organizations, including AL-MUFTA Communications in DOHA QATAR, News 8 in Austin, KGWN Channel 5 in Cheyenne, The Hallmark Channel, KOAP-TV/FM in Portland, and USA Cable TV Network in New Jersey. Martin Marietta—Falcon Air Force Base wrote that Monte “played an essential role in the design of the video presentation and production systems to be built for the Strategic Defense Initiative National Test Facility”. Monte Louis Barry was born on July 31, 1951, in Hackensack, New Jersey. Monte is survived by friends who are grateful for his deeply protective friendship. They are forever changed because of his astronomical wisdom and love.

Monte Louis Barry died from metastatic thymic carcinoma on March 28, 2022, at 4:44 PM. He was with friends as his heart took its final beats in perfect rhythm to his favorite Asleep at the Wheel playlist. Monte was known by many as a real-life... View Obituary & Service Information

The family of Monte Louis Barry created this Life Tributes page to make it easy to share your memories.

Send flowers to the Barry family.