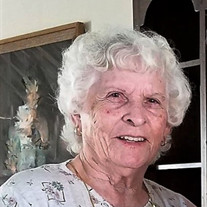 Mildred Emily Florence (Anderson) Jekel, “Millie”, was born in Denver, Colorado September 21, 1930 to James A. Anderson, and Sidney “Sadie” Louise Anderson. Millie was the youngest of five children, Peggy Singer, Everette R. Anderson (deceased), Glen Anderson (deceased), Sidney Anderson (deceased), and June Madliner. She had a large extended family in Denver and surrounding area. Millie led a large life full of love, joy, and extraordinary adventure. She graduated from Fort Collins High School in 1949 and married Jack Moore the same year. They traveled to California and around the southwest United States before returning to the Fort Collins area. They had four daughters, Connie, Jackie, Robin, and Elizabeth, as well as 15 grandchildren and 20 great-grandchildren. Millie married Fred M. Boyle, who passed in 1985, in the early 60’s and moved just outside Livermore, where they ranched and raised their combined ten children together. They later moved to Miles City, MT and didn’t return to Fort Collins until some years later. Millie later re-united with her childhood friend Alvin L. Jekel in Ft. Collins and together they formed a mining company. They mined several locations in the Rockies throughout 80’s. She and Alvin were married in November of 1987 and remained together until his passing in 2014. She returned to school at Larimer County Vocational Tech. College, earning her Practical Nursing degree, in 1986. She worked as a nurse for the VA Hospital System in Sheridan, WY, Walla Walla, WA and Miles City, MT until her retirement. They made Miles City their home for several years before moving to Seattle, WA to be closer to daughter Robin, granddaughter Mandee and family. After her retirement, she wrote and published poetry, as well as children’s stories, and was an active member in each community she was a part of. She was a life member of the American Legion, VFW, and National CattleWomen’s Association. She was an advocate for Veterans and dedicated her time to many projects and other organizations. Millie returned to Wellington, CO. in her last years where she met Robert “Bob” Brown. They enjoyed traveling together, with trips to Branson, Missouri and Nashville, Tennessee and spending time with each other and family. She also became an active member of the Wellington Senior Center and the Wellington Zion Lutheran Church. Mildred peacefully passed July 14, 2018 surrounded by her family. She is survived by her three daughters, Connie, Robin, and Elizabeth, their families, and Jackie’s surviving daughter and family. A celebration of her life will be held July 28th at 11 a.m. at Zion Lutheran Church of Wellington, CO, followed by her internment to Tahoma National Cemetery in Kent, WA on July 30th. Please, in lieu of flowers, consider a donation in her name to the American Brain Tumor Association. www.abta.org or the Wellington Senior Center or Zion Lutheran Church of Wellington, CO.

The family of Mildred E. Jekel created this Life Tributes page to make it easy to share your memories.

Send flowers to the Jekel family.