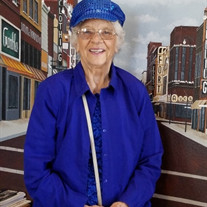 Maxine Louise Yankey (Spooner), 93 passed away peacefully on April 26, 2021 at the Brookdale Assisted Living facility in Fort Collins, Colorado. Born in Anselmo, Nebraska March 16, 1928, she was the fourth child and oldest daughter of Walter Erwin Spooner and Mary Elizabeth Milligan. She grew up on her family’s Custer County farm during the depression, the dust bowl, failing banks and wars. Maxine moved to Fort Collins, Colorado from Grand Island, Nebraska in 1962; where she raised her four children, Gary Hazzard, Myrna Emanuel, Mary Hazzard & Robyn Vanosdall. In the early 60’s she worked with her brother Glen Spooner at the old Red Owl store in Fort Collins and then found many of her forever friends while working at Ladd’s Covered Wagon. She was the smiling face of University National Bank for years until finding her place at CSU, where she retired from the Computer Science Department. Maxine ran a boarding house at the corner of Remington and Elizabeth where she would many times feed the tenants because they could barely afford their rent, those renters became mentors to her young children and remain friends to this day. Maxine married Ken Yankey on December 29, 1986. Maxine quickly retired so they could travel the country and make their home together on Colorado Street. She loved riding her bike, spending Saturday morning at garage sales and Thursday evenings watching concerts around town. She also loved her bowling league, taking her grandkids bicycling, roller skating and swimming. She was instrumental in making Foothills Gateway a better place for our community. She was an advocate for our special needs community and helped to bring real change to Foothills Gateway. Mary Gail, the 3rd child of 4 is a special needs person. Mom was encouraged to institutionalize Mary at age 3, that was a time when we “hid” our imperfect children. Mother did the opposite, she took her daughter to restaurants, movies, and parades! She brought Mary up in mainstream America and taught her to be an independent and valuable member of society. Mary is a living tribute to her mother’s love and legacy. She was an avid volunteer at the Fort Senior Center where she and her late husband Ken began volunteering at the old location at Mountain and Remington and continued for many years after the current center was constructed. Her biggest joy was working with the S.O.A.P. Troup at the Senior Center. She was quite the actress in her day and just knew she had been on Broadway in a previous life:) Maxine began sewing at an incredibly young age by sewing doll clothes for her baby sisters’ dolls. She sewed for many people around town making beaded Quinceanera Dresses, Mariachi Costumes, and school clothes for her friends' children. She was the greatest seamstress that her children, grandchildren, and great grandchildren knew. Many of them have cherished blankets or memories of their clothes being handmade by her. Gramma, as many knew her by, will always be an example of strength and courage, she worked very hard raising 4 children on her own while giving to those in need. An amazing woman who blanketed, clothed, and blessed her family and friends. Her Grandchildren were the light of her life. She was always there for them from teaching them everything from walking to riding a bike to tackling life's challenges with determination and dignity. Maxine was preceded in death by her Husband Kenneth Yankey, Sisters Helen Spooner & Lillian Yankey, Brothers Glen & LaVern Spooner, Son Gary Hazzard and Grandson Jason Vanosdall. She is survived by her three children Myrna Emanuel, Mary Hazzard and Robyn Vanosdall, eight Grandchildren, eighteen Great Grandchildren, 8 Great-Great Grandchildren and 2 on the way. A Celebration of Life service will be held on Sunday, May 30, 2021 at 11am at Bohlender Funeral Chapel, 121 West Olive, Fort Collins, CO.

The family of Maxine Louise Yankey created this Life Tributes page to make it easy to share your memories.

Send flowers to the Yankey family.