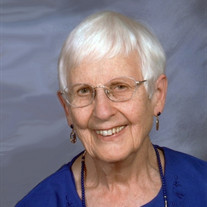 Maude Elmont Usel peacefully passed away on Saturday December 18, 2021 in Fort Collins, Colorado at the age of 97. She was born on November 15, 1924 to Herbert and Maude Adelaide Jakeman Elmont on the family farm in Byers, Colorado. Her name was to be Nancy Jean, but since she was born on her mom’s birthday, she became Maude Adelaide. She was the middle of five children. When she was six years old, the family moved to the Frying Pan River Valley near Basalt, Colorado. Later the family moved to Basalt where Maude went to school. She graduated from Basalt Union High School in 1942. She married Stanley Usel on March 1, 1944 in Aspen, Colorado. They were married for 74 wonderful years. She lived and worked on the Usel family ranch where she and Stanley raised their three children. She was active in the Methodist Church, the Order of the Eastern Star, Rebekah’s, Independent Order of Odd Fellows, and the Farmer’s Union. When the Usel family sold the ranch in 1958, Maude and Stanley moved to Greeley, Colorado where Stanley finished his teaching degree while Maude worked at the Gold Bond Stamp Gift Store. After Stanley received his BA and started teaching at Heath Junior High, Maude worked as the secretary of Franklin Elementary School. In 1964, Stanley was hired to teach at Poudre High School, so the family moved to Fort Collins, Colorado. Eventually Maude was hired by Poudre School District to work at Fort Collins High School. She started working in the main office and later became a paraprofessional in the English department. She was drawn to young people and working with them was a joyful experience. After retirement, she and Stanley took many trips. Three highlights were a cruise through the Panama Canal, a trip to Aosta, Italy where Stanley’s parents’ families lived, and two round trips driving the entire length of the Alaskan Highway. She was a longtime volunteer with the former Poudre School District Closet, the Larimer County Food Bank in Fort Collins, the First United Methodist Church, the local Democratic Party and the Poudre Retired School Employee’s Association (PRSEA). Maude was a proud wife and mother whose family came first. She was a kind, loving, caring and warm-hearted person. She loved baking, fixing special dinners for family and friends, dancing and listening to music. She had a large collection of records, CDs and music boxes. The house was always filled with music, and she was inspired to whistle, sing and dance along. She and Stanley were especially fond of dancing to polkas. They were avid campers and hikers. Maude’s much-loved husband, her two sisters and a brother preceded her in death. She is survived by her three children and spouses, son Leroy Usel and wife Randa, daughter Joyce Hubka and husband Jerry, daughter Carolyn Stegner, granddaughter Kendra Stegner and husband Nathan Bliss, grandson Matthew Usel and wife Lawrin Bartsch, former daughter-in-law Susan Usel and partner Ken Farrar, sisters-in-law Laurie Mullins and husband Galen, Rosina Johnson and husband Eldon and brother Albert Elmont. She is also survived by several nieces and nephews. The family would like to thank the staff at The Winslow, Lakeview Commons and Centre Avenue Health and Rehab Facility for the care extended to Maude during her time living in each facility. In lieu of flowers, please consider donations to Pathways Hospice, PRSEA Scholarship Fund, and the First United Methodist Church in Fort Collins, Colorado. Send In care of Bohlender Funeral Chapel – 121 West Olive Street, Fort Collins, CO 80524. A small memorial service will be held at the Columbarium located at the First United Methodist Church in the spring of 2022. Visit bohlenderfuneralchapel.com to send condolences.

Maude Elmont Usel peacefully passed away on Saturday December 18, 2021 in Fort Collins, Colorado at the age of 97. She was born on November 15, 1924 to Herbert and Maude Adelaide Jakeman Elmont on the family farm in Byers, Colorado. Her name... View Obituary & Service Information

The family of Maude A Usel created this Life Tributes page to make it easy to share your memories.

Send flowers to the Usel family.