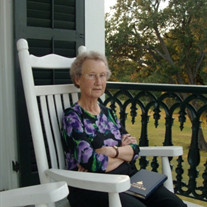 Mary Thelen Leather died on July 30, 2019 at Poudre Valley Hospital, after a year-long fight with cancer. Services will be held on Saturday August 3, 2019 at 10:00 at Bohlender Funeral Home, Fort Collins. Mary was born on November 6, 1928 to Irene Biergans Pung and Joseph Pung in Westphalia Michigan. She is survived by her children Jim Thelen (Joanie), Jane Thelen-Wade (Gary), John Thelen (Julie), Bob Thelen (Barbara) and Tom Thelen (Marilyn); grandchildren Matt Thelen, Amy Thelen, Derek Thelen, Trenton Wade, Lauren Wade, Joe Thelen, Jake Thelen, Jeff Thelen, Kathrine Thelen and five great grandchildren. Mary grew up on a farm near Westphalia. She had fond memories of skating on the pond with her brother, Jim, and playing with a variety of pets including a raccoon. In 1947, Mary married Eldred “Al” Thelen and moved to Fowler Michigan. They lived there until they decided to move west. In 1961, Mary and Al packed up their household goods, and their business into a semi-trailer and headed to Wyoming. They arrived in Laramie and established an auto body repair shop. After Al passed away, Mary later married Les Leather and moved to Colorado. She lived in Broomfield until Les passed away, at which time she moved to Fort Collins to be closer to her family. Mary was a homemaker while her children were small, and then she started baking at the University of Wyoming’s bakery. This was the start of a long career cooking for a variety of schools and universities. Mary enjoyed interacting with students and young adults. When Mary retired, she did not stop cooking and baking. She continued to cook and bake for her family, friends and neighbors. Many batches of cookies and loaves of banana bread have passed through her kitchen! Mary was an avid gardener. She grew a variety of flowers and always planted a vegetable garden each spring. She shared her bounty by canning – there were always orders for her tasty pickled green beans with jalapenos. Mary loved sports. When her children were little, she played catch with the boys. There were certain sporting events that she would always tune into - the Little League World Series, March Madness and the World Cup. She was frequently consulted when it was time to fill out a bracket for March Madness. Mary was “in the know” when it came to her college basketball. Christmas was one of Mary’s favorite holidays. She spent the prior months creating beautiful quilts and afghans to give to family and friends. She enjoyed sewing and her quilts have become cherished heirlooms. The holidays were also an opportunity for her to cook for a crowd. She hosted many Easter and Thanksgiving dinners. There was always room for one more at her table, and she would gladly set another place at the table for unexpected guests. Everyone was welcome and the more the merrier! Mary’s house was always a welcoming place where she wanted people to feel at home and loved. She had a genuine concern for others and was a compassionate person. If you needed someone to listen, Mary had a sympathetic ear. She touched many hearts in her 90 years and we will miss her dearly. The family asks that in lieu of flowers please donate to the American Cancer Society or St Jude Children’s Hospital in care of Bohlender Funeral chapel, 121 W. Olive, Fort Collins, CO 80524.

Mary Thelen Leather died on July 30, 2019 at Poudre Valley Hospital, after a year-long fight with cancer. Services will be held on Saturday August 3, 2019 at 10:00 at Bohlender Funeral Home, Fort Collins. Mary was born on November 6, 1928... View Obituary & Service Information

The family of Mary L. Leather created this Life Tributes page to make it easy to share your memories.

Send flowers to the Leather family.