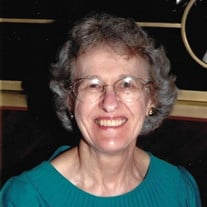 Mary Jane Fisher of Fort Collins went to meet our Lord and Savior peacefully at her home of fifty years on August 7. Jane was born January 27, 1934 to Leslie C. and Harriett E. Secrest at her grandparent’s home in Edgerton, Kansas. She moved to Ponca City, Oklahoma, with her parents when she was four and graduated from Ponca City High School in 1952. She attended Wheaton College in Wheaton, Illinois, where she graduated with a Bachelor of Science degree in Mathematics in 1956. She attended the University of Kansas as a graduate assistant and earned a Master of Arts degree in Mathematics in 1958. While at the University of Kansas she met her future husband, Richard, who was also a graduate assistant in mathematics. They married December 26, 1959, in Lawrence, Kansas. Jane taught mathematics at Wichita University for one year before moving to the Kansas City area where she taught mathematics at Wyandotte High School for three years. In 1970 she moved to Fort Collins with her husband and their three children. In 1980 Jane graduated from Colorado State University with a Master of Science in Computer Science. She worked as a computer programmer for 14 years for Fiscal Information in Loveland, Colorado. After the sale of that company she joined the sister company in Daytona Beach, FL and worked for them until September 2012. Jane was a devoted Christian and fellowshipped at The Bridge Church in Ft. Collins. After Sunday Services, Jane would fix a home cooked meal for family and for guests. During her free time Jane often enjoyed her time in Bible Studies, and her hobby as a seamstress and many of her clothes were of her own handiwork. Most recently Jane could be found with church friends crocheting; she enjoyed making blankets and baby hats for local hospitals. Jane was preceded in death by her parents, her husband Richard of 60 years and her daughter Anne Elizabeth Tooley. Survivors include her two children, David Robert Fisher and his wife, Eva of Snohomish, WA, John Richard Fisher and his wife, Leslie of Cheyenne, WY, four grandchildren, Brianna Marie Tooley, Brett Richard Tooley and his wife Naomi, Michelle Jeanne Fisher and Devan Richard Fisher, and two great grandchildren Ambrie and Myah Tooley, her brother Leslie Harold Secrest and his wife Linda of Dallas, TX. As an expression of sympathy, memorial contributions may be sent to Christian Missions in Many Lands, Inc

Mary Jane Fisher of Fort Collins went to meet our Lord and Savior peacefully at her home of fifty years on August 7. Jane was born January 27,... View Obituary & Service Information

The family of Mary Jane Fisher created this Life Tributes page to make it easy to share your memories.

Mary Jane Fisher of Fort Collins went to meet our Lord and Savior...

Send flowers to the Fisher family.