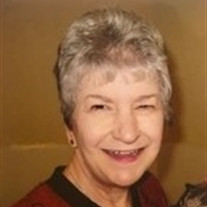 Marlene J. Kelly, 84, formerly of Fort Collins, died December 4, 2020 at Golden Pond Retirement Community in Golden, Colorado 3 weeks after surgery for a broken hip. Marlene was born on April 22, 1936 in Trinidad, Colorado to Clyde and Josephine (Barbera) Dawn. She graduated from Trinidad High School in 1954 and earned a scholarship to the University of Colorado. Marlene was one on only three women Accounting Majors and graduated from CU in 1958 with a B.A. degree in Accounting. During her freshman year at CU, she met her future husband, Donald Kelly. Marlene and Donald were married June 9, 1957 in Trinidad, Colorado and following graduation they moved to Trinidad. In 1959, Marlene and Don moved to Fort Collins, where she resided until late 2017, when she moved to Golden, Colorado to be closer to her daughter and son-on-law. Marlene worked at CSU for 29 years. In 1967 when she began her career at CSU and was the first female accountant and was the first woman in the Accounting Department to wear slacks to work. When she was asked who gave her permission to wear slacks to work, she responded, “I gave myself permission; I am professionally dressed so there is no issue here.” In 1973, she became the Manager of Accounts Receivable/Student Loans and remained in the position until her retirement in June of 1996. In 1976, Marlene was named “Boss of the Year” by the Poudre Valley Chapter of the American Business Women’s Association. In 1979, she was received a CSU Distinguished Service Award for administrative leadership. She was a member of First United Methodist Church and a 50+ year member of P.E.O., Chapter EB. Marlene was an avid reader her entire life. She is survived by her daughter and son-in-law, Kathleen and Mark Little; her brother, Bill (Jean) Dawn of Denver, her sister, Beth Box of Sammamish, WA, brother-in-law, Jerry (Liz) Kelly of Broomfield, CO and several nieces and nephews. Preceding Marlene in death are her parents, her husband of almost 60 years, Donald, her son, David, her bother-in-law, Richard (Dick) Box and nephew, Charles (Chip) Box. Due to COVID-19, a memorial service/celebration of life will be held at a later date. Interment will be at First United Methodist Church’s Columbarium, David’s Garden. In lieu of flowers, donations to The Scleroderma Research Foundation in honor of her son David Kelly, or to a charity of your choice in care of the Bohlender Funeral Chapel, 121 W. Olive, Fort Collins, CO 80524 are appreciated.

The family of Marlene J. Kelly created this Life Tributes page to make it easy to share your memories.

Send flowers to the Kelly family.