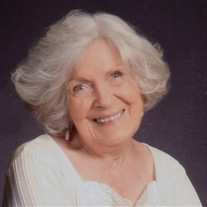 Marian Grace Barnes Tom and Alta Barnes had their third child, a baby girl, in distress. Grace Minium, her maternal grandmother, gently placed her in cold and warm baths long into the night. Helping her breathe and saving her life. She was named Marian for Mary, Grace for her grandmother. What a beautiful name. In later years Marian would share memories with her family. “Mom always knew where we were because our dog Mickey would be laying in front of our friends house where we were playing.” “Dad played the piano with a quartet. It was so special when he would play at home and we would stand around singing. He would read the funny papers to us while we sat on the couch.” Marian went to St. Vincent’s grade school in Denver, St. Francis high school and was awarded a full scholarship to Saint Mary’s of the Plains. At age fourteen, she applied for a job at the Weber Theater. She put down that she was sixteen so she could get hired. The seventeen-year-old manager caught her eye. His well styled sandy red hair, perfectly pressed tuxedo and shy smile stole her heart. Marian asked Sandy to the St. Francis Pep Club dance. Sandy agreed. “One thing, you have to ask my mom for permission.” She said. Alta agreed, but with a stern warning. “Take care of her, you know she is only fourteen.” Sandy and Marian fell in love and danced their way into adulthood. Sandy joined the Air Force. He was stationed at Scott Air Force Base, Bellville, Illinois. Marian was working at a large investment firm in Colorado. Things were going well for the two, but they missed each other. So, one evening, Sandy took a chance; “If I come home right now, will you marry me?” Marian looked down at the engagement ring on her hand and said, “Yes!” Sandy drove home and they eloped. When Marian called and broke the news to her parents, Alta’s matronly concern influenced her to call the police. Officers Lefty and Earl (you can’t make this stuff up) knew Sandy and Marian. Their beat included the Weber Theater where they would stop in and pull pranks on Marian behind the candy counter. These two visited Tom and Alta and calmed them down. Sandy and Marian’s love was for the ages. As time went on, they were blessed with four children: Bill, Donna, Debbie and Darla. According to her family, the best way to describe Marian was sophisticated. She had a natural beauty from her sparkling eyes to her gentle compassion. It was through these gifts that she was able to reach out to others and make them feel loved, safe and blessed. She had a deep relationship with the Blessed Virgin Mary. Each night, after the late news, she would turn her small statue of Mary to look upon her. Next, she pulled her rosary out of the drawer by her chair. Then she would begin her devotion. It was during her final contemplation with Mother Mary that she bowed her head and peacefully passed. In that moment, Marian shed the grief of losing so many loved ones over the years. Losing her dear Sandy less than a year before. We are all better people for knowing Marian. Every one of us was in her prayers. Through her prayers we became her family. Now it is up to us to continue her legacy of faith, love and kindness. Preceded in death by her husband George (Sandy), Daughter Darla and Grandson Sean. Survived by her son: Bill (Judy). Daughters: Donna (Gene) and Debra (Byron). Grandchildren: Bill, Ryan, Jason, Thom (Audra), Stephen (Wendy), Devin, Angela, Damon (Jessica). Greatgrandchildren: Taylor, Paige, Shaun, Jameson, Addison and Baby Giuliano. A Rosary will be held 6 pm, Monday, January 31, 2022 at Bohlender Funeral Chapel. The Funeral Mass will be held 9:30 am, Tuesday, February 1, 2022 at St. Joseph Catholic Church. Graveside Services will be held 11 am, Wednesday, February 2, 2022 at Ft. Logan National Cemetery, Staging Area A. In lieu of flowers contributions may be made to St. Jude Children's Research Hospital in care of Bohlender Funeral Chapel, 121 W. Olive, Ft Collins, CO 80524.

Marian Grace Barnes Tom and Alta Barnes had their third child, a baby girl, in distress. Grace Minium, her maternal grandmother, gently placed her in cold and warm baths long into the night. Helping her breathe and saving her life. She was... View Obituary & Service Information

The family of Marian Grace Sandage created this Life Tributes page to make it easy to share your memories.

Tom and Alta Barnes had their third child,...

Send flowers to the Sandage family.