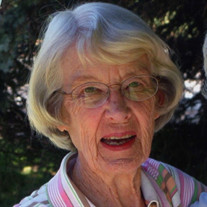 On Wednesday, December 18, 2019, Margaret “Joan” McChesney, loving mother, wife, aunt, grandmother, and great-grandmother passed away at the age of 93. Joan was born on February 4, 1926 in Fort Collins, CO to Robert and Elizabeth Frison. Joan and her brother grew up on a cattle ranch in Tensleep, WY where her pioneering grandparents established a homestead. She graduated from Fort Collins High School and attended CU and CSU; her social sorority was Gamma Phi Beta. Joan was married on December 20, 1947 shortly after her husband, Albert, graduated from CSU Veterinary school. They established a veterinary hospital in Bozeman, MT and had a ranch where they raised Hereford cattle. They raised two daughters, Susan Fry and Joal Olson. She has three granddaughters, one grandson, and seven great-grandchildren. Joan was a loving and caring woman who never said a bad word about anyone. She had a passion for reading, music, painting, baking, and love for all animals, especially her kitty cats. She volunteered every week for years at the Fort Collins Food Bank, She was Mrs. Clause for many years to first graders in a local grade school. She donated and contributed to many charities. She is known for her quick wit, her infectious smile and her kind and compassionate spirit. Joan was preceded in death by her father, mother, brother, and husband. She is survived by her daughters, grandchildren, great-grandchildren, and three nieces. A funeral service will be held on Monday, December 23, 2019 at the Grandview Cemetery 1900 W. Mountain Ave, Fort Collins, CO at 2pm. In lieu of donations or flowers please support the Denver Children’s Hospital or a charity of your choosing.

On Wednesday, December 18, 2019, Margaret &#8220;Joan&#8221; McChesney, loving mother, wife, aunt, grandmother, and great-grandmother passed away at the age of 93. Joan was born on February 4, 1926 in Fort Collins, CO to Robert and Elizabeth... View Obituary & Service Information

The family of Margaret Joan McChesney created this Life Tributes page to make it easy to share your memories.

Send flowers to the McChesney family.