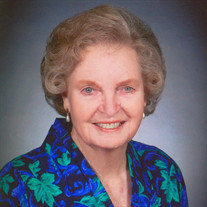 Margaret “Margo” Fixter, 95, of Loveland, died April 21, 2018 at Brookdale Assisted Living Center. Margaret Elizabeth Orr was born at home on Blythe Street in Hendersonville, NC on November 6, 1922 to Everett and Estelle Justus Orr. After living near her Grandmother and Grandfather Justus in a house on Cherry Street that her father built, Margo’s family moved to Orr’s Camp Road to be near Resort Camp, owned by her father’s cousin. She and her sister Ruth enjoyed playing in the camp pool, going for walks with cousins and collecting flowers. When she was five, the family moved to Seventh Avenue South in Hendersonville so Margo could attend school. In 1931, when Margo was in 4th grade, the family moved to a house on North Grove Street, owned by her Grandmother, where they lived until Margo graduated from college. Growing up, she attended the First Presbyterian Church, where she both she and Ruth were married. Margo went to Henderson High School from 1935-39 where she was on the staff of the Red and White newspaper, assistant to the librarian which earned her a school letter, and twice won the Grand Prize during National Book Week. She was also a member of the Commercial Club, the Home Economics Club and the softball team. Margo attended Asheville Teachers College in Asheville, NC from 1939-1943. While there, Margo served as: Treasurer of the freshman class, Secretary of the sophomore class, Chairman of the Student Finance Committee, Chairman of the Vesper Committee of the YWCA, Vice President of the senior class, Managing Editor of the college paper, House President of Florence Stevenson Hall, and as member of the Board of Directors for the Campus Cooperative Store. In her senior year, she was chosen to be a member of the “Who’s Who Among Students in American Universities and Colleges. She also participated in the Folk Dancing Club during college, the sword dance was her favorite, and even attended the Mountain Fold Festival at Berea College in Berea, KY. From 1943-47, Margo lived in Nashville, TN and was employed as a secretary and office manager in the Student Department, Division of Educational Institutions at the National Board of Education of the Methodist Church. The job included traveling to training centers in Sioux City, SD, Indiana, Iowa, Williamsport College, PA, Glen Lake Camp near Dallas, TX, National Student College in Illinois, and a Regional Student Camp in NC. While in Nashville, she attended McKendree Methodist Church and held several offices in the Young Sunday School class. She was a member, and eventually president, of both the YWCA Business Girls’ Club, and the Beta Sigma Phi Business Girls’ sorority. Margo met J. Stanley Fixter, a student at Garrett Theological Seminary, while working for Dr. Hiel Bollinger at the seminary. They were married in Evanston on December 21, 1947. While Stan was finishing his seminary degree, Margo worked as a secretary to Reverend Gene Duchaur, Wesley Foundation Director at Northwestern University. Their son John was born in Evanston in 1948. In 1950, Margo, Stan and John moved to Colorado Springs, CO with the YMCA. Margo joined the Young Wives Club, and was active in the Beta Sigma Phi sorority and the First Methodist Church. Son, Steve, was born in 1954. Stan became a Methodist Minister while in Colorado Springs which would begin the family’s journey through Colorado and Wyoming spanning almost 30 years, including: Leadville, CO where son Bob was born in 1956; Denver, CO; Rawlins, WY; Rivelion, WY, Casper, WY; Englewood, CO; Durango, CO; and finally, Fort Collins, CO , where the family finished serving their ministry. Margo was active in many church activities throughout her life including AAUW Circles, women’s prayer groups and P.E.O. She had a great sense of humor and loved to laugh and sing. She also loved to travel and camp along the way where she would make homemade spaghetti sauce and friend chicken over a two-burner Coleman stove. Margo played golf whenever she could, honoring advice from her doctor to “take my iron and live on the greens every day.” Once, at Castle Pines golf course, after he hit a ball into the water, she advised Tiger Woods to “drop a ball and hit another.” Margaret Elizabeth Orr Fixter is survived by many members of her family: son, John and Sharon Fixter of Lone Tree, CO, and their three children; Matt and Mandi Darr and four children, Mark and Katie Fixter and three boys and Tim and Melisa Fixter and two children; son, Steven and Susan Fixter of Castle Rock, CO; son, Robert and Carole Fixter of Estes Park, CO and their children Tiffany and Luke, and Emily Fixter; younger sister Ruth Lancaster of Virginia Beach, VA; as well as nieces and nephews. When asked her favorite scripture, Margo quoted the 93 Psalm. When asked her favorite hymn of all time she said, "God Bless America!" which she proceeded to sing word for word at age 95. A Memorial Service for Mrs. Fixter will be held at 10:30am, Monday, April 30, 2018 at First United Methodist Church, 1005 Stover St., Fort Collins.

The family of Margaret "Margo" E. Fixter created this Life Tributes page to make it easy to share your memories.

Send flowers to the Fixter family.