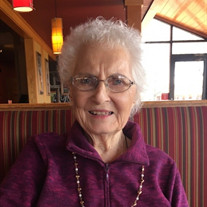 Margaret “Peggy” Baccelli passed away unexpectedly at her home in Fort Collins, Colorado on Tuesday, September 10th at the age of 91. She was born Margaret Jane Littmann in San Pedro California in 1928. Peggy is reunited in death with her beloved husband of nearly 60 years, Albert Baccelli. A devoted mother, Peggy leaves behind her three daughters and their families: Teresa Wells (Howard Wells), Catherine Williams (Darrell Williams), Anita Fanelli (Dominic Fanelli), her grandchildren - Joshua, Erina, Marcus, Rachel, Jessica, Christina and Adam (Wells) Dominic (Fanelli) and Alexandra (Fanelli-Maag) and 4 great grandchildren - Zenobia (Kirby), Elijah and Oliver (Wells), Oliver (Maag). As the daughter of a US Naval officer, Peggy spent her early years relocating to various naval bases around the country and abroad, including Honolulu in 1941. At the age of 13, Peggy witnessed the bombing of Pearl Harbor. She often shared this experience as an important recounting of history. Peggy and her family returned to California in 1942 where she remained for nearly 50 years. She married and raised her family in the Bay Area. Peggy and Al retired to their Lake Tahoe home and later to Minden, Nevada in the 1980’s. Peggy and Al followed their children to Colorado in 2001, and have since resided in Fort Collins. It was in Lake Tahoe that Peggy took up oil painting. Forever underestimating her own talent, Peggy surprised herself with many beautiful paintings that she exhibited in California & Colorado, winning special recognition for her art. Peggy was a devout Catholic with unwavering faith. She donated both time and treasure to the church for many decades, and in turn, her church family gave her tremendous support in her final years. A funeral mass will be celebrated in honor of Peggy at 10 am, Monday October 7th at St. Elizabeth Ann Seaton Catholic Church, 5450 S. Lemay Ave. Fort Collins, Colorado 80525. A reception will follow. Interment of Peggy’s ashes next to her beloved husband, with religious rites, will follow at 2:30 - Fort Logan Cemetery, 4400 W. Kenyon Ave., Denver, Colorado 80236.

Margaret &#8220;Peggy&#8221; Baccelli passed away unexpectedly at her home in Fort Collins, Colorado on Tuesday, September 10th at the age of 91. She was born Margaret Jane Littmann in San Pedro California in 1928. Peggy is reunited in death... View Obituary & Service Information

The family of Margaret J Baccelli created this Life Tributes page to make it easy to share your memories.

Margaret “Peggy” Baccelli passed away unexpectedly at her home...

Send flowers to the Baccelli family.