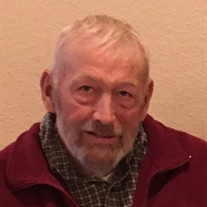 Lynn Darrel Parker, 77, passed away Thursday, August 06, 2020 at Poudre Valley Hospital in Fort Collins Colorado. Lynn was born February 27, 1943 to Velma Parker of Sterling, CO, Al Parker of Loveland, CO and Stepmother Evelyn Parker of Loveland, CO. The oldest of 3 boys, Lynn attended Sterling High School lettering in Football, golf before, graduating in 1961. Lynn attended North Eastern Junior College for two years before marrying Dalene Williams of Sterling, CO, in November of 1963 and moving to Fort Collins. Although they left Sterling, Lynn’s heart remained with his family homestead, 15 miles east of Sterling on the south side of highway 14 as it climbs Pawnee pass. Having helped his grandfather on the ranch and worked construction while in Junior College, Lynn worked on the university’s facilities and maintenance crew and joined a saddle club while attending college at CSU. Still an employee and student at CSU at the time of the birth of his first son, Jim, in 1967. Lynn left CSU shortly before the birth of his second son, Joe, in 1971. By the time of the birth of his third son John, in 1972, Lynn's company, Parker Construction, was in full swing. He subcontracted small projects across the field of construction becoming known for the efficiency of his earthwork as well as the outstanding quality of his cabinetry, carpentry, drywall, and concrete. Following the Big Thompson Canyon flood of 1976 Lynn focused on small civil projects in the canyon, doing earthwork and pouring retaining walls so that residents could return to their homes. Lynn also set up a machine and welding shop alongside his cabinet shop in Fort Collins. Around his other projects Lynn specialized in welding and machine jobs that other shops could not do economically. Early on, Lynn and his friend Lary Harris built their first two spec houses. By 1975 Parker Construction was contracting to build about one house a year, around Lynn's other work, over a twenty year period. While Lynn built houses, he also built a solid reputation in the fields of structural, mechanical and civil engineering. By the time his fourth son and youngest child, Scott, was born in 1977, Lynn had had become the guy to call for difficult projects. His skill-set attracted the attention of entities like the Colorado Division of Wildlife, the Fort Collins water treatment facilities, and the various regional raw water supply companies. Lynn was seriously injured in 1983 while working on his ranch. This caused him to take a break from field and residential work, which gave him the time to pursue a few technical projects. He contracted to develop a laser egg counter and, later, a laser elk counter for the division of wildlife. This work pushed the boundaries of civilian technology at the time. Lynn opened another shop for hydraulic repair and controls in 1985 and continued to offer welding and machine shop services. Lynn left the housing industry in the 1990s shifting his focus to the water infrastructure industry. While in college, Lynn had ridden the length of most of the northern Colorado irrigation ditch roads and natural water courses on horseback. He had developed a rare understanding of the overall system and it affected his career path. His Company, Parker Construction and Machine, contracted with public and private water agencies solving problems and updating water infrastructure. Lynn worked on hydraulic projects all over the North Platte Basin and went as far south as the Sanchez Reservoir on the Rio Grande Drainage. Every project is a monument to a rare and capable man who tried his best to accommodate his work to the existing infrastructure and who knew best when and how to repair or replace it. Outside of work, Lynn loved his wife and family above all else. As a young father he enjoyed taking his family camping, jeeping and fishing in the mountains. When his health began to suffer he still planned events with his brothers and their families on his ranch every summer while their kids were still young. Lynn prided himself in having his kids with him on the ranch and on his projects. He helped his sons learn to think, lead, and develop the grit to do the hard jobs at work and face the hard times in life. He did the same for countless other young people over the length of his too short life and 6 decade career. Lynn Parker will be missed. Lynn was preceded in death by his Grandson Devin Parker of Fort Collins, CO, his youngest brother Tom Parker, of Reno NV, and his younger Brother, Gary Parker of Colorado Springs, CO. Lynn is survived by his step mother Evelyn Parker of Loveland, CO, his wife, Dalene Parker of Wellington, CO, their four sons, Jim Parker of Pierce, CO, Joe Parker of Douglas, WY, John Parker Of Laporte, CO and Scott Parker of Firestone, CO, 6 grandchildren, and his cat. Lynn Lost his life to cancer after a long and difficult fight, which he kept mostly to himself. Barely able to get out of bed, he went to work on Tuesday morning and passed away after thirty four hours in the hospital at 9:12 pm the following Thursday August 06. Lynn Parker never quit. Larimer County Public Health was kind enough to grant a variance for Lynn’s funeral but instructed that we not include the time or place of the service in Fort Collins.

The family of Lynn D. Parker created this Life Tributes page to make it easy to share your memories.

Send flowers to the Parker family.