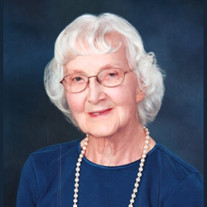 Lorine N. Lindholm, 96, of Fort Collins, CO passed away January 3, 2022 She was born April 22, 1925 in Norwich, Kansas. She grew up on a farm there with her two brothers and graduated from Norwich Rural High School in 1943. She went on to graduate from Kansas State University College of Agriculture and Applied Science with a degree in Dietetics on May 29th, 1948. She met Howard Lindholm through 4-H activities. They both attended KSU where their relationship blossomed. They were married on June 6, 1948, and Howard graduated from KSU in 1949. They had their first three children (Charlotte in ’50, Wayne in ‘51 and Dale in ‘53) while living in Cheney, KS. Shortly after Dale was born, they moved to Ft. Collins, CO, where Howard began teaching Agriculture as a professor at Colorado State University. The first house they bought in Ft. Collins was on Taft Hill Rd. Lorine had just had a tree planted in the front yard for her birthday, when someone made an offer on their house they couldn’t refuse! So, in 1955 they sold that house and moved to a farm Northwest of Fort Collins, which is still the family farm today. Their youngest child, Marcia, was born in December 1957. Not long after that, Howard came home and asked Lorine “How would you like to go to West Pakistan?”, to which Lorine responded “Where’s that?” So, long story short, in 1959, Lorine packed up the family (with all 4 kids, ages 8 down to 1 ½) to move to Pakistan, where her husband, Howard, worked with the U.S. AID project through CSU to establish an Agricultural College at Peshawar University. While in Pakistan for four years, the oldest three children got to experience two years in a boarding school. After returning to Fort Collins, Lorine helped her husband, Howard with pigs and chickens on the farm and raising their children! Both Lorine and Howard were active 4-H leaders for 15 years with the Laporte Cowpunchers 4-H club. Lorine helped with the foods and sewing projects. In 1984, Lorine and Howard, went to Zaire as short-term missionaries. Lorine used her training in dietetics to show how to prepare nutritious food with the foods available there. They had to return to the U.S. because of a hip infection for Howard. Lorine was a gracious and caring wife, helping Howard recover from hip infection and surgery. In the late 1980’s through the 1990’s, Lorine worked for 10 years in food service at CSU. Lorine enjoyed being active in her church and Sunday School class and was a great prayer warrior and supporter with Women’s Missionary Fellowship. Howard and Lorine were blessed with 60 years together and celebrated their 60th anniversary in June of 2008. After 60 years of marriage Lorine’s husband, Howard, went to be with our Lord and Savior on December 7, 2008. Since that time, she has enjoyed spending time with children, grandchildren and great grandchildren. She was always interested in what each of them were up to and lifted them all up in prayers. After a fall and some loss of strength Lorine moved into assisted living at Good Samaritan, Fort Collins in February of 2020. She enjoyed getting to know many people there, playing bingo and going to devotions, chapel and other activities. She was a bright light in the facility, friendly and sweet, a bit adventurous and well liked. She will be missed there and by family and friends. After a mini stroke at the beginning of December, Lorine struggled to talk and communicate, which was frustrating. She was ready to let God graduate her to heaven and be healed. Lorine has joined her husband and two brothers in heaven, who preceded her in death. She is survived by a daughter Charlotte Price of Oregon; son, Wayne and wife, Linda Lindholm, of California; son, Dale and wife, Connie Lindholm, of Fort Collins; and daughter Marcia and husband, Russ Rhoads, also of Fort Collins; eight grandchildren and sixteen great grandchildren. A Celebration of Life will be held at LifePointe Church on Monday Jan. 10th at 10:30 am. Graveside service will be at 1:30 at Grandview Cemetery. If you want to send flowers, they can be purchased through Paul Wood Florist 114 N. College Ave. Fort Collins, CO. 80524 phone 970-482 -9121 or Palmer Flowers 3710 Mitchelll Fort Collins, CO. 80525 Phone 970-226-0200. In Lieu of flowers, contributions can be made to LifePointe Church or to Samaritan's Purse (through Life Pointe -designate in memo for church or for Samaritan's Purse, in memory of Lorine Lindholm. Their Web site is sharethelife.org). The service will be live streamed at https://us06web.zoom.us/j/86773761017?pwd=ZW01Q2RXekpaRkgvRExMbDRoUlZHUT09

Lorine N. Lindholm, 96, of Fort Collins, CO passed away January 3, 2022 She was born April 22, 1925 in Norwich, Kansas. She grew up on a farm there with her two brothers and graduated from Norwich Rural High School in 1943. She went on to... View Obituary & Service Information

The family of Lorine Nettie Lindholm created this Life Tributes page to make it easy to share your memories.

Send flowers to the Lindholm family.