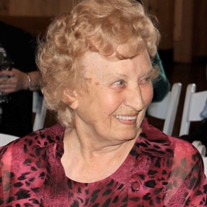 LoAnn K Skaar passed into the hands of her Lord on November 4, 2021. Born in Presho South Dakota to Lowell and Louise Henke nearly 88 years ago, LoAnn left an indelible mark on the world and everyone she met. Her terms of all relationships (family included) were resolute: Love Everyone Always, and I will meet you wherever you are - but it is up to each of us to do our part. She moved to Osborne KS with her family as a young child and returned to Presho in 5th grade to live on the Henke farm. LoAnn’s family then moved to Rapid City in her 8th grade where she met and married Wilbur A Skaar (Bill), and shortly thereafter had her two children - Cheryl & Steve. Bill’s military career took them in short order to Merced CA, Montgomery AL, Burns Flat OK, Glendale AZ, and Ft Walton Beach FL. She lost her husband and life partner to war in Vietnam in 1968 and raised her two children on her own - while completing her master’s degree in speech pathology in Greeley CO. Her children emancipated, she moved to Phoenix AZ in the 80’s where she stayed until 2017 - moving back to Ft Collins CO to be close to family. LoAnn travelled the world – Europe, Alaska, Hawaii, southeast Asia, South America, and her beloved Africa on several occasions, giving her time generously everywhere she went. The YMCA of the Rockies in Estes Park was LoAnn’s favorite – volunteering for many summers at the Dorsey Museum. LoAnn will be missed by all whose lives she touched – especially her family whom she treasured most of all. She is survived by daughter Cheri Kimleigh, son Steve and wife Jodi, Cheri’s children Samael, Chenoa (and children) & Quillen, Steve’s children Kelsey & Trevor, sister’s Elaine, Janice, and Patsy (and spouses/children & significant others). LoAnn was surrounded at the end by many other important people she loved. RIP LoAnn – you are loved. In lieu of flowers, the family would like donations to be made in LoAnn's honor to YMCA of the Rockies or Earth Watch. Celebration of Life to be held at Bohlender Funeral Chapel in Ft Collins on November 17th from 6 to 8 PM – details at bohlenderfuneralchapel.com.

LoAnn K Skaar passed into the hands of her Lord on November 4, 2021. Born in Presho South Dakota to Lowell and Louise Henke nearly 88 years ago, LoAnn left an indelible mark on the world and everyone she met. Her terms of all relationships... View Obituary & Service Information

The family of LoAnn K. Skaar created this Life Tributes page to make it easy to share your memories.

LoAnn K Skaar passed into the hands of her Lord on November 4,...

Send flowers to the Skaar family.