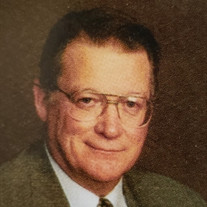 Dr. Lionel Vernon Baldwin, 87, of Fort Collins passed away early Wednesday morning June 26, 2019. He was born to Eugene & Wanda Baldwin of Port Arthur, TX, May 30, 1932. Lionel married Kathleen Flanagan on September 3, 1955. Dr. Lionel V. Baldwin served in academic administration for over 30 years, with his knowledge and skill aiding in his success. As the founder of National Technology University, NTU, in 1984 until his retirement in 2000, Dr. Baldwin served as the president of NTU. His goal was to create a nonprofit organization that offered graduate courses via satellite and led to a Master of Science. The NTU national satellite network provided advanced education to technical professionals at more than 1000 sites. NTU coordinated instruction offered by 53 major universities. In 1985, the congressional Caucus for Science and Technology cited him "for outstanding leadership in fostering industry/university relationship and training via telecommunications technology." Prior to his incredible achievement of establishing a graduate learning institution, Dr. Baldwin was Dean of the College of Engineering at Colorado State University (CSU) for 20 years. He joined CSU in 1961 as an Associate Professor of Civil Engineering. Baldwin received his B.S. in Chemical Engineering from the University of Notre Dame in 1954 and his S.M. in Chemical Engineering from Massachusetts Institute of Technology in 1955. In 1959, he earned his Ph.D. degree at Case Institute of Technology while serving six years in the U.S. Air Force stationed at N.A.S.A. He relied on his immense knowledge and expertise as a leader in developing linkages between industry and universities. In 1967, he created the first ITV program in the U.S. employing courier-carried videotape to deliver CSU graduate classes to seven Colorado industries. Dr. Baldwin has received many honors throughout his lengthy career, including an award for plasma research from NASA, the Kenneth Andrew Roe Award from the American Association of Engineering Societies, and a Distinguished Service Award from the University of Notre Dame. He also received an Innovator Award from the Society of Satellite Professionals International, Engineering Manager of the Year from the American Society for Engineering Management, Entrepreneur of the Year from the Fort Collins Chamber of Commerce, and inclusion in the Engineering Education Hall of Fame. One of Dr. Baldwin's greatest achievements was patenting an apparatus for increasing ion engine beam density. Dr. Baldwin is preceded in death by his parents, Eugene & Wanda Baldwin, his wife Kathleen and a granddaughter Kelsey Baldwin. He is survived by his four adult children, Brian C. Baldwin (Michelene) of Fort Collins, CO, Michael V. Baldwin (Julie) of Houston, TX, Diane M. (Baldwin) & Wayne Troup of Morrison, CO and Daniel F. & Kristen Baldwin of Alpharetta, GA. Dr. Baldwin also is survived by seven grandchildren. A Memorial Mass will be held at 10:00 a.m. on Tuesday, July 23, 2019 at Saint John XXIII Catholic Church, 1220 University Ave, Fort Collins. A reception will follow at Suzanne and Walter Scott, Jr. Bioengineering Building, 700 Meridian Ave, Fort Collins, CO 80523-1301. In lieu of flowers memorial contributions may be mad to Ram Catholics, Fort Collins, CO, Https://saintjohn.church, 1220 University Ave, Ft. Collins, CO 80521 or CSU Engineering Scholarships, https://advancing.colostate.edu/ENG/GIVE, 700 Meridian Ave, Fort Collins, CO 80525, in memory of Lionel Vernon Baldwin.

The family of Dr. Lionel Vernon Baldwin created this Life Tributes page to make it easy to share your memories.

Send flowers to the Baldwin family.