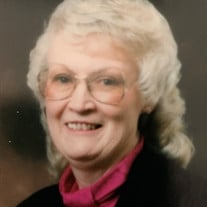 Linda Ann Wilkinson (Renz) Griffith left this life on February 17, 2022, at Greeley Village in Greeley, Colorado. She was 86. Linda was born on February 1, 1936, in Fort Morgan, Colorado to Evan Clair Wilkinson and Clara (Burrill) Wilkinson. Moving to Fort Collins as a young girl because her father accepted an opportunity. Linda attended Fort Collins schools and graduated in 1954 from Fort Collins High School with honors. Linda was the youngest of 6 kids. Her siblings are Frank, Sarah, Robert, Donald, and Edward. Linda married Arlie Renz and they had 3 children, Tom (Karen) Renz of Denver, CO, Karel (Don) Oppie of Fort Collins, CO, and Konnie (Alfonso) Loera of Greeley, CO. She is also blessed with 8 grandchildren, 10 great grandchildren, along with many nieces and nephews. Linda later married Stanley Griffith until his death in 2012. Linda was involved in many community services volunteering and looking out for others less privileged. Some of the things she was involved with was Meals on Wheels, Toys for Tots, American Businesswomen Association, Red Cross, and tons of Moose Lodge and Elks organization events and fundraisers. Linda’s work ethic started at a very young age as her parents owned Laurel Street Grocery Store, she then started work a few years later at other downtown businesses including Aggie Theater, First National Bank, and Public Service Company for 30 years. She joined the Moose Lodge in Fort Collins in 1976 and for the next 6 year she had served as Escort, Junior Regent, Senior Regent, Junior Graduate Regent, Ritual Director, and Recorder. She received many Degrees with the Moose Academy of Friendship, College of Regent, Star Recorder. From 1984-1985 she was the 1st Deputy Grand Regent and Council Member of chapter 413 out of Fort Collins. After retirement she went to work for The Moose Lodge International as Director of Finance for 6 years. Linda always taught us that giving was better than receiving and tell her last days she was helping someone out. Linda was an avid bowler who achieved many trophies placing in the top of many tournaments, one being First place Doubles in the Nationals in Seattle. She won State and City championships and placed 1st place on her Monday Night Originals League, bowling for Collins Auto Renewal for many years. Linda loved to sew, crafts, and bake. You would see her up many nights after working a full day making something, one year she made over 100 bowling shirts for the Fort Collins Leagues. Her craft room was full of anything you could imagine as all gifts came from her room; rarely would anyone get a store-bought item. Remember this was in the day when there was no Google, so this was all her imagination. As far her baking skills, she was known at the Moose Lodge Bingo night as the dessert queen. Mom would rather eat dessert than anything else. Linda is survived by her 3 children, 8 grandchildren, and 10 great grandchildren, and many nieces and nephews. She is proceeded in death by her Husband Stan Griffith, parents Evan and Clarissa (Clara) and siblings Frank, Sarah, Robert, and Donald. In lieu of flower please donate on behalf Linda Griffith: Dementia Society of America – www.dementiasociety.org Shriners Hospitals – https://donate.lovetotherescue.org/ Moose Heart - https://www.mooseheart.org/ A livestream of Linda's service will be available on the Bohlender Funeral Chapel website.

The family of Linda Ann Griffith created this Life Tributes page to make it easy to share your memories.

Send flowers to the Griffith family.