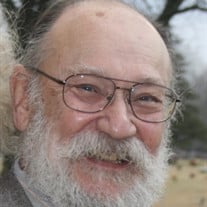 Lawrence W. (Larry) Sherman died at his Fort Collins, CO home on (July 15, 2021), surrounded by his family after a ten-year battle with cancer. Larry was an ardent enthusiast, generous friend and an intrepid learner who quickly built expertise in any subject or worthy cause that piqued his interest. He and his beloved wife and artist, Leslye J. Sherman, who died in 2015 of ALS, were active in the peace, justice and environmental movements and were committed supporters of the arts. Larry lived life to the fullest pursuing many interests and passions, including music, birding, swimming, gardening, gourd growing and crafting, reading, photography, performance art, hiking and traveling. His ongoing discovery through reading and his photography seemed to go beyond documentation. One of his recent art projects was making sculptures and musical shakers out of plastic bottle tops collected from drinks he and Leslye consumed since moving to Fort Collins to highlight the cumulative impact of tiny amounts of plastic on the environment. Larry was a professor of Educational Psychology at Miami University in Oxford, OH for 39 years before retiring in 2010 and relocating to Fort Collins, CO in 2013. He was a jazz trumpet player and co-director of the Oxford Gourd and Drum Ensemble: OGADE, that performed both percussive and tonal gourd instruments. He graduated from Bowling Green State University in 1963 with a B.S. in music, earned a Master of Arts in Music from Arizona State University in 1964, and taught instrumental music in elementary and secondary schools in Detroit before securing a Ph.D. in Educational Psychology from Wayne State University in 1971. His research and teaching focus was humor, early childhood social development, Lewinian interactional psychology, and cooperative learning. He was highly active professionally with multiple publications and conference presentations. In 2001 he was the recipient of the Ig Noble Prize, for his influential research report, “An Ecological Study of Glee in Small Groups of Preschool Children.” The Ig Nobel Prize is a satiric prize awarded annually since 1991 to ten individuals “….to honor achievements that first make people laugh, and then make them think.” Organized by the scientific humor magazine, Annual of Improbable Research, the Ig Noble Prizes are presented at Harvard University followed by recipients’ public lectures at MIT. Larry was very proud of this honor. He believed in the power of humor and science, and personally was full of inquiry, nuance and laughter. Larry was active in the Ohio and National Audubon Society, the International Society for Humor Studies, the Ohio Association for the Study of Cooperation in Education, and the American Gourd Society. He loved swimming and competed regularly at the United States Master Swimming meets both in Ohio and Colorado. Often, he would tell friends he won, but then would laugh that he was the only person swimming in that age division. His last swim meet was in May 2021. Born was in Toledo, Ohio, Larry is survived by his son, Eli Sherman (Diana Salzarulo Sherman); daughter, Heather Sherman; grandchildren Kyle and Jacob, sister, Norma Kelling and brother, Dennis Sherman; and numerous nieces and nephews. In lieu of flowers, a donation to the Rocky Mountain Chapter of ALS Association or the American Cancer Society would be welcomed. The funeral will be private.

Lawrence W. (Larry) Sherman died at his Fort Collins, CO home on (July 15, 2021), surrounded by his family after a ten-year battle with cancer. Larry was an ardent enthusiast, generous friend and an intrepid learner who quickly built expertise... View Obituary & Service Information

The family of Lawrence William Sherman created this Life Tributes page to make it easy to share your memories.

Send flowers to the Sherman family.