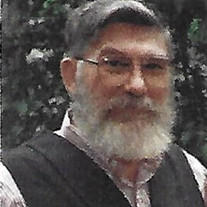 Lawrence Brady (Larry) Helburg – aka Rattlesnake July 19, 1941 - July 21, 2020 “Decide how you want to be remembered, and live your life accordingly.” - LBH Larry was a third generation Colorado native born in Boulder, CO to Lester F. and Elinor Helburg. The second of five children, he and his family lived in Boulder, South Dakota, and Estes Park before settling in Golden, CO, where he graduated from high school. Larry graduated from Colorado State University with a Bachelor’s degree in Forestry and Plant Pathology and began working as an Assistant State Forester with the Colorado State Forest Service (CSFS) in 1971. He was the Project Leader for the state’s Dutch Elm Disease control program. He also worked in the Community Forestry Division to monitor and assist communities in their public tree management systems. Before Larry retired from CSFS in 1996, he also worked in the Conservation Education Division. During that time, he used a unique blend of historical characters (Rattlesnake, Crazy Nate, and L.B. Henry to name a few), stories, and current trends to teach young and older audiences alike about past conservation efforts (or lack thereof) and the importance of looking to the future to conserve our natural resources. For almost 10 years after retirement, Larry assisted Steve Bowers, a local horse trainer/trader/educator/farmer who trained and worked with draft horses and taught driving clinics locally and around the country. He helped Steve develop driving videos and books, and was instrumental in developing a teamster training device using bicycles as horses. This device has since been used successfully by many big hitch companies around the U.S. to train their drivers, including the famous Budweiser hitch drivers. In 1966 Larry married Jean I. Lohse in Fort Collins, where they lived for 54 years. They had no children; however, they mentored many young people throughout their marriage. While still working for CSFS and after retiring, Larry was active in a local black powder club. He and others initiated for several years an educational rendezvous to teach people about life in the mid-1800’s when mountain men trapped beaver to sell for top hats and before gold and silver were discovered in the West. He also continued telling stories and educating all ages about the life of the mountain man, prospector, range cowboy, and other characters of the Old West. Larry was a hunter and fisherman, and he taught Hunter Education classes for 25 years. He also volunteered as Santa’s helper at the Farm at Lee Martinez Park every Christmas for many years until 2009. In late 2019, Larry was diagnosed with Cholangiocarcinoma or bile duct cancer, which is not a curable disease. The family wishes to thank the caring support from staff at Pathways Hospice, the UC Health Cancer Center, and the Medical/Hospice unit at Poudre Valley Hospital. Besides his wife Jean, Larry is survived by three sisters -Susie, Charlotte (Stan), and Billie Jo (Bernard), 11 nieces and nephews, and many other extended family members. He was preceded in death by his parents and brother Dick. There will be no formal memorial service at this time. A celebration of his life will be held at a later date. In lieu of flowers, please consider making a donation in Larry’s name to either Pathways Hospice in care of Bohlender Funeral Chapel, 121 W. Olive Street, Fort Collins, 80521 or to the UC Health Northern Colorado Foundation (designate the Medical/Oncology Unit at Poudre Valley Hospital) in care of Bohlender Funeral Chapel, 121 W. Olive, Fort Collins, CO 80524. “Thems what hurries thru life, plum missed the whole point.” - Rattlesnake

The family of Lawrence B. Helburg created this Life Tributes page to make it easy to share your memories.

Send flowers to the Helburg family.