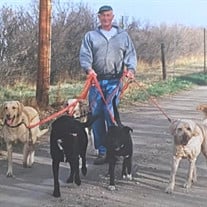 Larry Paul Dixon (Bubba), passed away peacefully at home on October 7, 2021. He was born on Mother's Day, May 12, 1946 to Charles and Florine Dixon. He graduated from Fort Collins High School in 1964. He married Lyla Noller in 1967. He attended Colorado State University before transferring to Fort Lewis College in Durango, Colorado. He completed his education at Colorado Western College in Montrose, Colorado and graduated in 1971with his BA. Over the years, Larry worked at several jobs including being accepted in the managment program for Kmart stores in Fort Collins, Aurora, and Longmont, Colorado. He was then transferred to Pocatello, Idaho where Larry decided he was tired of moving around and took his family back to Fort Collins in 1976. He then purchased a landscaping business, working until his retirement in 2020. Larry loved the outdoors and was happiest when he was camping, fishing, and hiking in the Poudre Canyon with his dad and brother or hunting and fishing in Alaska with his son. Larry also loved his dogs Elsa, Sophie, Stella, Maggie, and Izzy. He often said he preferred the company of his dogs tothat of most humans. He was rarely seen driving his truck without at least two dogs sitting beside him. Lary was preceded in death bu his parents. He is survived by his wife of 54 years, Lyla, two children Adam (April) Dixon of Homer, Alaska, and Heather (Ken) Godell of Loveland, Colorado, six grandchildren Anthony, Kayla, Devin, Alyssa, Britni, and Hunter, six great grandchildren Sam, Noah, Fisher, Olivia, Zaylor, and Sebastian, and brothers Ray and Ron Dixon. In lieu of flowers, please consider making a contribution to the Animal Freinds Alliance in Fort Collins, CO.

Larry Paul Dixon (Bubba), passed away peacefully at home on October 7, 2021. He was born on Mother's Day, May 12, 1946 to Charles and Florine Dixon. He graduated from Fort Collins High School in 1964. He married Lyla Noller in 1967. He attended... View Obituary & Service Information

The family of Larry Paul Dixon created this Life Tributes page to make it easy to share your memories.

Send flowers to the Dixon family.