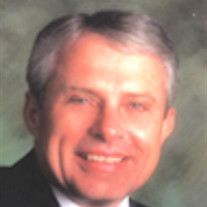 Larry Bohlender, 80, passed away Friday, March 25 at the Center at Centerplace in Greeley. The great-grandson of Germans from Russia pioneers who settled in Weld County in the 1880&#8217;s, Larry was born in Greeley on July 11, 1941, to Wilmer... View Obituary & Service Information

The family of Larry Leon Bohlender created this Life Tributes page to make it easy to share your memories.

Send flowers to the Bohlender family.