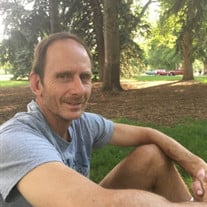 It is with great sadness that Kirk Walters lost his battle with Early-Onset Alzheimer’s Disease on June 27, 2021 at Aspen House in Loveland. He was at peace and spent the week with his family members by his side. He was 58. Kirk was born January 1, 1963 in Fort Collins, Colorado, to parents John and Barbara Walters, and brothers John, Jr. and Mike. Kirk graduated from Poudre High School in 1981 where he spent his years playing football along with many other sports. Kirk graduated from CSU in 1987 and received a Bachelors degree in exercise and sports science, and attended graduate school at CSU where he studied exercise physiology. Kirk got married to his wife, Suzanne, on November 5, 1994, and had a daughter, Emma, on November 20, 1999 five years later. Kirk spent many years playing rugby for the Fort Collins Flamingos Rugby Club where he enjoyed and met so many friends. While Kirk was known best for his achievements in sports and in recognition of his hard work throughout the years, we want to also shed light on the things people may not have always noticed. Kirk was a dedicated father who would do anything for his family at the drop of a hat. He consistently led his daughter, Emma, in humility, kindness, boldness, and courage. The strength of his family is owed all to him for the ways he constantly put others first. Kirk also made people laugh everywhere he went. Something that will be dearly missed about him is his unique and somewhat dry sense of humor that seemed to have the perfect timing that had anyone close by bent over, cackling. He was full of joy and life and love. And we hope, more than anything else, that is what he is remembered for. Kirk is preceded in death by his parents, John and Barbara, and survived by his wife, Suzanne, daughter Emma, and brothers John, Jr. and his wife Laura, and Mike and his wife Judy, along with many nieces and nephews and aunts and uncles who loved him dearly. Kirk was loved by so many who had the pleasure of being around him. In lieu of funeral services, there will be a celebration of life for Kirk at a later date.

It is with great sadness that Kirk Walters lost his battle with Early-Onset Alzheimer&#8217;s Disease on June 27, 2021 at Aspen House in Loveland. He was at peace and spent the week with his family members by his side. He was 58. Kirk was... View Obituary & Service Information

The family of Kirk Douglas Walters created this Life Tributes page to make it easy to share your memories.

It is with great sadness that Kirk Walters lost his battle with...

Send flowers to the Walters family.