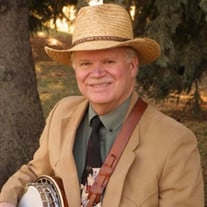 Fort Collins lost one of its best on September 23, 2021. Ken Seaman, 79, passed away from an aneurysm, leaving behind a legacy as an educator, bluegrass musician, sports fan, and beloved family member and friend. Ken was born June 8, 1942, in West Plains, Missouri, and spent the first part of his life in Eminence, Missouri. His dad Carl hosted bluegrass bands at the Current River Opry, where Ken began his love of bluegrass. He got his first banjo when he was sixteen. This began a lifetime of playing in bands and promoting bluegrass festivals. In 1962, Ken met a beautiful city girl from St. Louis at the roller rink near Alley Springs during summer break and married Mary McWay, on August 20, 1966. They had two children while in Missouri, Julie and Brian. After graduating with a degree in political science, Ken began his teaching career in Winona and then took a position as Eminence High School principal, in addition to teaching and coaching basketball. During those early summers, he earned a master’s degree at Drury College. He and Mary also owned the Dairy Isle, and Ken continued to play music and began holding festivals along the Jacks Fork River. In 1974, Ken and Mary packed up and moved to Fort Collins; they both loved the beauty, and Ken loved the thriving bluegrass scene. Ken partnered up with a couple of friends and refurbished and re-opened the old Red Garter Bar in Old Town (the current Lucky Joe’s). Ken missed teaching, however, and left the restaurant business to teach in the mountains – the perfect place for a small-town educator who liked to host community pie socials and play softball games with his kids on warm days. He spent the majority of his career teaching grades 4-8 at Gleneyre, Red Feather Lakes and Livermore. Students and parents loved Ken’s involvement, good humor, lively wit, and love for people, especially kids. In 1976, his youngest son Nick was born. Ken, Brian, and Nick had a passion for sports, especially baseball and basketball. They regularly made the drive to Denver to watch his Denver Nuggets, and Ken could be seen at Rockies games sporting his St. Louis Cardinal’s baseball cap with his Colorado Rockies t-shirt. More than his love of music and sports was his adoration of his two granddaughters, Jacque and Stella. Ken was part-time caretaker of each of granddaughters, making up games, playing catch, acting out dramas, playing board games – the activities were endless. He was proud that his daughter Julie and his granddaughters could sing and never missed a recital, concert, play, or musical. Ken was also proud of grandson Keegan, who could keep up with Ken’s quick wit. He loved Keegan’s interests in hunting and fishing and his involvement with FFA, the organization that Ken also enjoyed as a teenager. Throughout his life in Colorado, Ken played his banjo with the Bluegrass Patriots in shows, gigs, and festivals too numerous to count. Summers took the band all over the U.S. and Europe. Every year, he loved booking bands and gearing up for his legendary Mid-Winter Bluegrass Festival. Later in life, he began playing in a second band, the Laramie River Band. He also loved keeping up with former students, colleagues, bluegrass fans, friends, and family on Facebook, in addition to posting classic pics and billboards of old bluegrass bands and stars. Ken will be remembered most for his love of people, his gentle way of making people feel at ease, his wonderful ability to make people laugh, and his amazing abundance of energy. He leaves behind countless students, bluegrass fans, friends, and family: his wife Mary, daughter Julie Milewski(Paul), son Brian Seaman(Paula), late son Nick Seaman(Erin), granddaughters Jacque Rickett and Stella Seaman, and grandson Keegan Milewski. Funeral arrangements are pending.

Fort Collins lost one of its best on September 23, 2021. Ken Seaman, 79, passed away from an aneurysm, leaving behind a legacy as an educator, bluegrass musician, sports fan, and beloved family member and friend. Ken was born June 8, 1942,... View Obituary & Service Information

The family of Kenneth Eugene Seaman created this Life Tributes page to make it easy to share your memories.

Send flowers to the Seaman family.