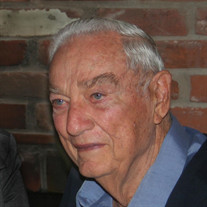 Kenneth Jacob Kechter, 83, of Fort Collins Colorado. Passed away peacefully October 22, 2017, Kenneth passed away due to a heart condition. Kenneth was born in Fort Collins Colorado on August 7, 1934 to Jacob Kechter and Elizabeth (Yeager) Kechter. Kenneth was the youngest of two sons. His brother Arnold Kechter passed away in 1973. Kenneth grew up on Akin St. and went to the old Washington school on Shields St. and the old Lincoln Jr. high school and graduated from the old Ft. Collins high school in 1952. In 1995 he went on a blind date with some friends where he met the love of his life JoAn Franz. On November 20th 1955 they married and started their life long journey together. They started a family right away and raised 5 children together in South College Heights where Kenneth built the house where his children grew up. Kenneth and JoAn were married almost 62 years until JoAn passed away on July 27th 2017. Kenneth followed in his father’s footsteps and was part of a family construction business with his father and his brother. Later on in life he went to work for Kodak and also for Larimer County and he finished out his career at Point Five windows where he really enjoyed making custom windows. Kenneth, like his wife enjoyed the many animals that they had over their lives. He always had a smile on his face and his warm kind blues eyes would always light up a room. He was a man of few words and a man of integrity. He will always be remembered for his playful spirit. He would often show children how far he could put his left thumb in his ear and they were always amazed until he showed the children as he was laughing that he had no left thumb. His laughter brought joy to those around him. Kenneth is survived by his five children, Randall F. Kechter, Denise J. Miles (Kevin Miles) Dawnetta M. Mitamura (Jim Mitamura), Rodney K. Kechter (Laurie Kechter) and Reginald A. Kechter. His eight grand children, Kollette Miles Decker (Dan Decker) Kelli Miles Vaughan (Anthony Vaughan) Nate Miles (Brianna Mazzella), Nikki Kechter Croft (Reuben Croft), Paul Kechter (Jami Kechter) Teresa Kechter, Jacob Kechter and Nicholas Kechter, and his five great grandchildren Delaney Kechter, Harlow Kechter, Ladan Decker, Dillion Mazzella and Elizabeth Kechter. In lieu of flowers please make a donation to the Global Missions Foundation Inc, or because of his love for animals, contributions may be made to Bounce, Animal House Rescue and Grooming, Big Bones Canine Rescue, and Best Friend Animal Society. Thank you.

The family of Kenneth Jacob Kechter created this Life Tributes page to make it easy to share your memories.

Send flowers to the Kechter family.