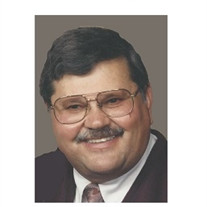 Keith D. Miller, 81, of Fort Collins passed away on January 8, 2020, after a brief stay in hospice care due to a chronic condition. Keith and his fraternal twin, Kenneth, were born in Greeley, Colorado, on February 3, 1938, as the only two of eight children to be born in a hospital, to Frank and Elizabeth (Lizzi Brunz) Miller of LaSalle where the family farmed. Keith told many stories of the twins getting into mischief such as daring each other to see who could keep their galoshes-covered foot in the fire the longest (Keith ended up with a scar on his shin from the rubber melting) or put their finger into the lawn mower (Kenneth got the cut finger). Because they shared a car in high school, Keith would crawl out the window from the classroom to beat Kenneth to the car. Keith attended LaSalle Elementary, Big Ben (where he rode his horse to school) and Greeley High (the Wildcats) where he graduated in 1956. After graduation, along with 4 high school friends, Keith joined the Navy and rode the train from Greeley to Chicago to attend boot camp in Great Lakes, Illinois, where he got his nickname “Kady”. From there, he traveled to Long Beach, California, where he attended training as an Interior Communications Technician as well as being certified to maintain 16 mm film projectors. He then flew to join his best friend on their ship, the heavy cruiser USS Helena CA-75, on its Far East Cruise in the Pacific. A highlight was that the Admiral who commanded the Seventh Fleet transferred his flag to the Helena and Keith was responsible for showing movies to the Admiral – tough duty. On a second Cruise which included Australia, he went through the time-honored line-crossing ceremony which initiated people crossing the equator for the first time. Upon returning home following his honorable discharge after serving 4 years, Keith worked on the farm for a while and then moved to Fort Collins to attend Colorado State University. He met up again with a high school classmate, Mary Ann Salzman, whom he married in 1961. When they were expecting their first child, he left school and began working in construction as a hod carrier then driving big equipment. They had two children, Stephanie and Gregory. Then Keith moved into selling life insurance and then transferred to outside sales (paint, lighting fixtures, equipment rentals and finishing up with industrial first aid route sales). Keith was active in Jaycees and Elks. He also volunteered for youth sports. Coached Little League Baseball, pulled chains for high school football games, 30 years as spotter and scorer for Men’s and Women’s Basketball and Football, longtime Ram Club supporter and later supported Women’s Volleyball. He really enjoyed knowing young athletes, meeting their families, the coaches, the staff and the officials. Visiting CB & Potts or Charco Broiler after the game with “the guys” was a highlight. After his divorce, Keith met his significant other of 40 years, Nila A. Hobbs. They were introduced by their good friends, Caroline and Doug McArthur. The close foursome shared many experiences over the years. Keith loved meeting and helping people. He said that he liked making sales cold calls and doing collections. Almost wherever he traveled, he would run into someone he knew or strike up a conversation because of the logo on a hat, shirt or jacket and somehow manage to find a connection. Keith was preceded in death by his parents, his brothers Alfred, Jim (Helen), Roy, and his sisters Esther (Marshal) Freeman and Shirley (Bob) Bierbach. He is survived by his significant other, Nila A Hobbs, ex-wife, Mary Ann Miller, brothers “Dutch”, Kenneth (Bonnie), children, Stephanie (Steve) Dugger and Greg (Val) Miller, grandchildren Erica Miller, McKenna, Macee, Blake Dugger as well as many nieces, nephews, grand and great grand nieces and nephews. A graveside service will be held at Grandview Cemetery in Fort Collins on Friday, January 10, at 11:00 a.m. with military honors. In lieu of flowers, donations may be made to Colorado State University Foundation for Men’s or Women’s Basketball or Volleyball Discretionary Fund or in care of Bohlender Funeral Chapel, 121 W. Olive St., Ft. Collins CO 80524.

Keith D. Miller, 81, of Fort Collins passed away on January 8, 2020, after a brief stay in hospice care due to a chronic condition. Keith and his fraternal twin, Kenneth, were born in Greeley, Colorado, on February 3, 1938, as the only two... View Obituary & Service Information

The family of Keith Dean Miller created this Life Tributes page to make it easy to share your memories.

Send flowers to the Miller family.