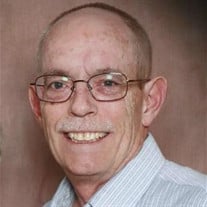 Keith E. Cary, 63, passed away at home, after a long illness, on December 7, 2017. He was born on November 6, 1954 in Fort Collins, to Kenneth & Mildred Cary. He attended schools in Fort Collins and graduated from Poudre High school in 1972. He worked for the Royal Crown-Nehi Bottling Co. for 12 years. Keith wed Marilyn Lollar-Baird on October 10, 1990 and were married for 27 years. He then worked for the Anheuser-Busch Co. as a BP&S Operator. He retired on November 13, 2016 after 23 years. Keith enjoyed travelling while on vacation across America with his wife and daughters from Florida to California. He was an avid sports fan. He loved watching the Rockies, Nuggets, and the Avalanche on TV. Keith especially loved the Broncos and was a devout fan whether they were winning or losing. He loved Marvel Comic books especially Spiderman and started collecting when he was 12 years old. He loved movies and wouldn’t miss going to the theater to watch a Marvel movie as soon as it came out. He also enjoyed playing the game of pool and darts after work with his co-workers. His great sense of humor, love of life and family will continue to be an inspiration to all who knew him. He is survived by his wife, Marilyn M. Cary, and his daughter, Arnetta “Kay” Cary, and step-daughter, Lisa M. Weber of Ft. Collins CO, Brothers: Steven Cary and wife, Connie of Ft. Collins, Thomas Cary and wife, Karen of Loveland, Richard Cary of Austin, TX, 3 Grandchildren: Hannah Weber of Ft. Collins, Micah and Noah Weber of Longmont, CO. He was preceded in death by his parents, Kenneth and Mildred Cary of Ft. Collins, CO. Memorial service will be held at Bohlender Funeral Chapel, 121 W. Olive St., Fort Collins, CO on Wednesday, December 13, 2017 at 2:00 pm with a reception to follow. Please go to: bohlenderfuneralchapel.com to share a story or send condolences to Keith’s family.

Keith E. Cary, 63, passed away at home, after a long illness, on December 7, 2017. He was born on November 6, 1954 in Fort Collins, to Kenneth & Mildred Cary. He attended schools in Fort Collins and graduated from Poudre High school in 1972.... View Obituary & Service Information

The family of Keith Earl Cary created this Life Tributes page to make it easy to share your memories.

Send flowers to the Cary family.