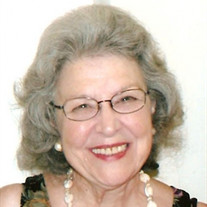 Kathryn Marie Holt (nee DiMercurio) departed this plane of existence on May 2, 2020 at 9:33 p.m. in Loveland, Colorado. Kathryn was born August 15, 1930 in Pittsburg, California to Tom and Agatha DiMercurio. She was the third of their 4 children -- one boy and three girls -- and was the apple of her father’s eye. In spite of the Great Depression, Kathryn described her childhood as a happy one, full of abundant food, fun and friends. She started working at only age 13 for the Post Dispatch newspaper, answering phones and collecting delinquent subscription fees from subscribers who would deliberately not pay so that Kathryn could collect her commission in person! Graced with beauty and a sparkling personality, Kathryn enjoyed being an athlete in High School. In her youth, she attended the University of California in Berkeley and worked for Dow Chemical. Eventually, she moved to Spokane, Washington, where she fell in love with the dashing and handsome Darrel W. Holt, an advertising man. Darrel and Kathy -- as she was known to her friends -- moved across the United States as Darrel moved up the career ladder from ad man to radio station owner to eventually getting his PhD and becoming a professor. Kathy gave birth to three girls, who enjoyed their fun and unconventional mom! In 1971, they settled in Fountain City, a suburb of Knoxville, Tennessee, where Darrel enjoyed a long tenure as the Chairman of the Department of Communications at the University of Tennessee. Upon arrival there, Kathy found her dream home in Beverly Acres where she became beloved by neighbors and many other friends. She went back to school and obtained her Bachelor of Fine Arts degree from UT. Kathy loved being a student and was a lifelong fan of UT football, idolizing her “Golden Boy,” Peyton Manning. After Darrel passed away in December of 2004, Kathy began volunteering at the Art Center in Fountain City and grew close to a large number of local artists in the Knoxville area. She was extremely joyous when her Art Show was graced by over 400 attendees and garnered rave reviews in the newspaper! She also began attending nearby Fountain City Presbyterian church. She loved hearing the choir, especially on Palm Sunday, and attending their potlucks where she was always asked for her recipes. Kathryn is survived by her three devoted daughters Randi (Huntsman), Sandra Holt, and Lori (Lambert Williams), their spouses Bill, Mike, and Jim, as well as 9 grandchildren and 23 great-grandchildren. Kathryn adored the Great Smoky Mountains and her adopted home in Fountain City. In keeping with her request, Kathy’s daughters will scatter her ashes in a private ceremony. If desired, memorials may be made to the Fountain City Art Center or to the Dr. Darrel W. Holt/Dr. Herb Howard Scholarship at the University of Tennessee in Knoxville.

Kathryn Marie Holt (nee DiMercurio) departed this plane of existence on May 2, 2020 at 9:33 p.m. in Loveland, Colorado. Kathryn was born August 15, 1930 in Pittsburg, California to Tom and Agatha DiMercurio. She was the third of their 4... View Obituary & Service Information

The family of Kathryn Marie Holt created this Life Tributes page to make it easy to share your memories.

Send flowers to the Holt family.