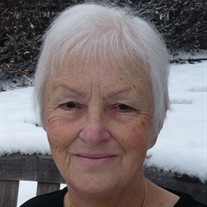 Karen Dee Marwitz, 81, with family by her side, passed peacefully at her home in Fort Collins, CO on December 10, 2021. Karen was born in Fort Collins, CO on September 25, 1940 to John D Squier and Mary Lou (Kindrick) Squier. She was subsequently raised by her aunt, Madeline Squier, who lost her sight years before becoming Karen’s caretaker. The Squier family was a ranching family near Livermore, CO before moving to Fort Collins in the 1920s. Karen grew up in Fort Collins and graduated from Fort Collins High School in 1958. She then attended CSU for a year, pledging to Kappa Delta sorority. At CSU, she met John Marwitz, fell in love, and they married in the summer of 1959. Between 1960 and 1965, they had five children. In 1967, John earned a BS and MS in Civil Engineering from CSU and accepted a position as Assistant Professor of Atmospheric Science at U of Wyoming. John then became a professor, and later, the Atmospheric Science Department head at UW. While in Laramie, Karen earned a BS and MS in zoology/physiology with the intention of becoming a medical doctor. But following a divorce, she switched career tracks, earning a BS in Nursing along with Phi Beta Kappa honors. She moved back to her hometown and worked as an RN with Larimer County Public Health Department in the early 1980s. In 1986, Karen and John remarried, and Karen moved back to Laramie. Upon John’s retirement from UW in 1999, John and Karen moved back to Fort Collins CO. In 2019, John passed away due to cancer, followed in 2020 by their daughter, Kristen Dee Marwitz, also due to cancer. Karen loved antiques, genealogy research, traveling, Christmas, and was an avid reader. With her father in the 1970s, and later with son Eric, Karen acquired and sold antique furniture, pottery, glassware, and jewelry. Karen loved learning and was a natural researcher. She was also an excellent travel planner for the family, and put this skill to use often. Most of all, Karen loved her family and she loved God. She loved hearing the gospel with her son Todd at City Park Church in Fort Collins. Despite a challenging childhood, Karen always surrounded herself and her loved ones with love. Karen is survived by sons Curtis (Caroline), Scott (Maristella), Todd, and Eric, sisters Sunny Van Patton, Janet Hammond, and Donna Jean Whitlow, brothers Ralph Hammond and Earl Hammond, eight grandchildren, and four great-grandchildren. A family graveside burial service will be held December 18, 2021 at Grandview Cemetery in Fort Collins. In lieu of flowers, a memorial gift to Guiding Eyes for the Blind, in the care of Bohlender Funeral Chapel, will be appreciated.

The family of Karen Dee Marwitz created this Life Tributes page to make it easy to share your memories.

Karen Dee Marwitz, 81, with family by her side, passed peacefully...

Send flowers to the Marwitz family.