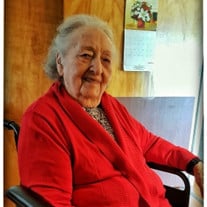 Julia was born in Southern Colorado in 1925. Her father was a rancher and sheep herder, her mother was a homemaker. As a young woman she started working early. After her father died she began working at the age of 16, supporting herself and her mother. She was a sales clerk, she worked at a meat packing plant, and during World War II she worked at a munitions plant supporting the war effort. She was lively and brilliant with a wonderful sense of humor and a love for numbers. Each day she opened the curtains in her dining room and welcomed in the sun with a sweet sweet voice. Her love for our Lord and his beautiful mother was a foundation upon which she built a life of unconditional love, sharing and humility. She fed thousands of meals in her lifetime and no one was ever turned away or left hungry from her kitchen. As a mother, she worked hard and sacrificed much so that her eight children would never lack anything. What we didn’t have in material things, she made up for with abundant and unconditional love...and really good warm bread or biscuits, with butter and jelly. Julia was a treasure to the entire community, working, cooking for festivals, and crocheting blankets for fundraising events. She was a true friend to her neighbors and the most wonderful mother in the world. We will miss her greatly but there’s no doubt that we all have a greater connection to our God because of her. Now, she has God’s ear, in person. She was married to our father, Joseph Deas LeJeune for 41 years, whom preceded her in death in 1993. She is survived by her eight children, 16 grandchildren, and too many great-grandchildren, and great-great-grandchildren to list. Viewing will be held 5 p.m. - 6 p.m. with the Rosary to begin at 6 p.m., Sunday, July 7 at 2019, Bohlender Funeral Chapel. The Funeral Mass will be held at10 a.m. on Monday, July 8, 2019 at Holy Family Catholic Church. Interment will follow at Grandview Cemetery.

Julia was born in Southern Colorado in 1925. Her father was a rancher and sheep herder, her mother was a homemaker. As a young woman she started working early. After her father died she began working at the age of 16, supporting herself and... View Obituary & Service Information

The family of Julia M. LeJeune created this Life Tributes page to make it easy to share your memories.

Julia was born in Southern Colorado in 1925. Her father was a...

Send flowers to the LeJeune family.