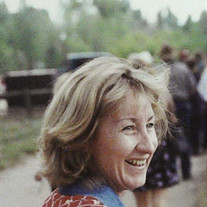 Judi Lynn Vos was born to William F. and Donna Jean (Maier) Kendall on August 21, 1959, where she joined her older brothers: Kenny (Fort Collins, CO) and Jim (Cleveland, TX). Judi went to dwell in the house of the Lord on January 27, 2022. Born in Fort Collins she lived most of her life in a three mile radius and was very proud to be part of a Colorado Centennial native family. Judi was educated at the local schools: Moore, Washington, Bauder, Blevins and Rocky Mountain High. She worked for ZVFK Architects (5-83 - 4-85). Then she worked for Larimer County Treasury (1985 – 1992). In 1993 she moved to the City of Fort Collins Accounts Payable until June 1996. After high school, Judi married Bruce Pino in August 1978. They were divorced in June 1995. Judi moved to Auburn, MA with Tom Vos in April 1996. They then moved to Durham, NC 1997-1998. While in Durham, Judi worked in Accounts Receivable at South Chem. Tom and Judi then moved back to Fort Collins to care for her parents. Judi and Tom were wed in Loveland on August 1, 1998. Together, they enjoyed collecting antiques, riding Harley motorcycles all around the country, camping, and visiting friends and family. Returning to Fort Collins allowed Judi to renew her passion for gardening, where she also went back to work for the City of Fort Collins in Finance, Accounts Payable and then as Cash Systems Coordinator. In 2015 she left the City and went to work for the Platte River Power Authority for two years. She then transferred to Larimer County Finance Accounts Payable to help to implement a new financial system and retired early in 2021 due to health concerns. She is survived by her husband and his family, her brothers, her Aunts Rozella Erickson and Lucille Owens, cousins, nieces and nephews and grandnieces and grandnephews. Judi was known for her strong work ethic and the infectious smile she always wore. People were always drawn to her because: she cared about them, wanted to know about them, and also put a smile on their face. Visit BohlenderFuneralChapel.com to send condolences to the family.

Judi Lynn Vos was born to William F. and Donna Jean (Maier) Kendall on August 21, 1959, where she joined her older brothers: Kenny (Fort Collins, CO) and Jim (Cleveland, TX). Judi went to dwell in the house of the Lord on January 27, 2022. Born... View Obituary & Service Information

The family of Judith Lynn Vos created this Life Tributes page to make it easy to share your memories.

Send flowers to the Vos family.