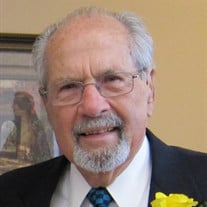 John F. Harris, 89 of Loveland, Colorado, passed away December 25, 2020 at home surrounded by his wife, Donna and his two daughters, Elizabeth and Nicole and sons-in-law, Jeff and Dave along with other family members John was born December 19, 1931 at the family home in Nashville, Tennessee to Charles P. Harris and Argie J. Nelson Harris. John was a life-long member of the Seventh-day Adventist Church. He graduated from Highland Academy in Portland, Tennessee in 1950 and from Southern Missionary College (now Southern University) in 1955, with a degree in Religion. He continued his education at the Potomac Seminary in Maryland graduating in 1957 and Andrews University in 1966 with master’s degrees in Religion and Religious Education. John began his life-long vocation as an Ordained Pastor in the Georgia Cumberland Conference before going to the Seminary in 1957. In 1959, John and his family accepted a call to go to Thailand to be missionaries. John learned to speak, read and write the language of Thai, which he said was the most difficult task he ever accomplished. John continued to converse with his sons in Thai at every opportunity until his death. John built and pastored the first Christian church on the island Phuket, the Bankian SDA Church and was the first pastor of the Phuket SDA Church (before the building was actually finished and occupied). He was a member of the King’s Heralds Quartette, Thailand, singing on the Voice of Prophecy Radio Broadcast. In 1969 he moved to Singapore with his family and taught religion at Far Eastern Academy. On two different occasions he, along with several other teachers, took a group of students on singing evangelistic tours, by school bus, from Singapore to the Northern tip of Thailand and on the 2nd trip from Singapore, south to Bali. In 1973 they returned permanently to the USA. The last churches he pastored in the U.S. were in the Rocky Mountain Conference. The Gunnison SDA Church, in Gunnison CO and the Nucla SDA Church in Nucla Colorado. His final call came once again from his beloved Thailand, in 2002, where he was asked to pastor the Ekamai SDA Church in Bangkok from October 2002 to October 2004. John continued preaching until September of 2016. John loved to sing and throughout his life, he was a member of various quartets, and other singing groups. The first quartet he sang with was with his father and two brothers and his sister. John was preceded in death by his parents, Charles P. Harris and Argie J. (Nelson) Harris, his sister Margaret Francis (Harris) Osborne, and his brother William Nelson Harris. John is survived by his brother Charles P. Harris, Sr. (Ruth) of Nashville, Tennessee, wife, Donna R (Jones) Harris of Loveland, CO; sons, John F. Harris, Jr. (Rick) of Plainfield, IN; William Daniel Harris (Jackie) of Sarasota FL; Ruben Gerald Harris of Orlando, FL; daughters, Elizabeth Argie (Harris) Kresge (Jeff) of Loveland, CO; Laura Jane (Harris) Adair (Jerred) of Grass Valley, CA; Bonus children, Donald Norman of Rough and Ready CA; David Norman (Christine) of Leonardtown, MD, and Nicole (Norman) Watson (Dave). He enjoyed 10 grandchildren: Casey (Heather), Tiffany (Bobak), Stephanie (Sonny), Rebecca (Erik), Jonathan, Lia, Elijah, Nicholas, Adriana, and Ryan. Additionally he was blessed with 9 Great grandchildren: Giovanna, Gabrielle, Nathan, Bennett, Parker, Kayley, Isla, Lilly, and Kaylyn, and many nephews and nieces. Celebration of Life service(s) will be held in Loveland, Grand Junction/Palisade, Colorado and in Centerville Tennessee, in the Spring. Dates will be announced later. (please go to Donna’s Facebook page for more information on these dates.) John’s ashes will be scattered at a location, in the Mountains of Colorado, of his choosing. Contributions can be made in John’s name to a charity of your choice.

John F. Harris, 89 of Loveland, Colorado, passed away December 25, 2020 at home surrounded by his wife, Donna and his two daughters, Elizabeth and Nicole and sons-in-law, Jeff and Dave along with other family members John was born December... View Obituary & Service Information

The family of John Frederick Harris created this Life Tributes page to make it easy to share your memories.