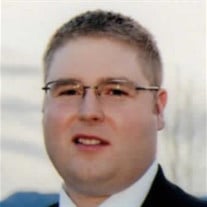 John Robert Gallatin, 35, of Sheridan, WY, was killed in an auto crash on November 12, 2017. His wife, Amanda Gallatin and their dog Sadie, survived. John was born November 12, 1982, in Fort Collins, CO. A 2001 Fort Collins High School graduate, John earned a Civil Engineering Degree from CSU. He worked several years for the US Forest Service/White River National Forest, and in 2014 accepted a position as an Air Quality Engineer working for Wyoming Department of Environmental Air Quality in Sheridan, WY. He and Amanda married on April 4, 2014. John was a genuine and caring man who loved his wife, his family, and the Lord. Their dog Sadie brought him joy and he was a good 'dad' to her. Training her to sit, stay, shake, give hugs and kisses. He and Amanda enjoyed hiking and shooting guns. John is survived by his wife, Amanda Gallatin of Sheridan, WY; parents, Sherman and Mary Louise Gallatin of Fort Collins, CO; sister, Suzanne (Aren) Peter of Laramie, WY. A Graveside Service will be held at 2:00 p.m. on Friday, December 15, 2017, Grandview Cemetery. A Memorial Service will be held at Northern Colorado Long Term Acute Hospital, Saturday, December 16 from 2-4pm., 4401 Union St, just east of I-25 on Hwy 34, Johnstown, CO 80534. Memorial Contributions may be made to the Four Paws Animal Shelter, Casper, Wyoming in care of Bohlender Funeral Chapel, 121 W. Olive, Fort Collins, CO 80524. Friends may send condolences to the family at bohlenderfuneralchapel.com. A Memorial BBQ Celebration will be held when Amanda is out of rehab and can attend the service.

The family of John Robert Gallatin created this Life Tributes page to make it easy to share your memories.

John Robert Gallatin, 35, of Sheridan, WY, was killed in an auto...

Send flowers to the Gallatin family.