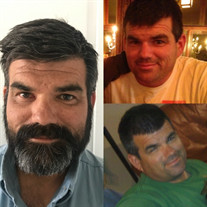 Joel Dee Jennings, 54, of Parker, Colorado, passed away April 5, 2022, after more than 11 years fighting metastatic melanoma cancer. Joel was born December 22, 1967, in Ridgecrest, California (his father, Raymond, was a civilian electronics engineer working at the China Lake Naval Weapons Center at the time). From 1969-'71 Joel and his family lived in Sierra Vista, Arizona. In 1971 the family returned to Boulder, Colorado where Joel spent the rest of his childhood years. Joel attended a variety of Seventh-Day Adventist schools: Boulder Junior Academy for grades 1-8, Campion Academy in Loveland, CO, for high school (graduating in 1987), and Union College (Lincoln, NE) and Walla Walla University (College Place, WA) for college. Joel graduated cum laude from Walla Walla University in 1992 with a BS in Plant Management. Joel's daughter, Eliot M. Jennings, was born in August of 2009, to Joel and his then wife, Dayna. Joel was Eliot's rock; “daddy,” best friend, patient teacher, and protector. Joel married Delores Oldenburg in December of 2017 and they lived in Parker, Colorado. You could often spot Joel and Delores on a motorcycle or at their neighborhood pool with Eliot and Bella (Delores' granddaughter). The family also loved spending time together in Breckenridge. Although a Californian by birth, Joel was a Colorado kid and grew into a Colorado man. Much of his childhood, youth, and adulthood were spent four-wheeling in the Colorado high country in the summer and skiing throughout Colorado in the winter. He also spent a lot of time hiking the Colorado mountains, summiting more than twenty 14,000 foot peaks over his lifetime. Joel also played numerous golf courses across Colorado. Joel didn't limit his outdoor activities to Colorado. His passions took him to skiing in a number of states; many trips exploring Moab, UT, and Canyon Lands, and a number of winter trips to the Baja California Peninsula and other places in Mexico as well as Hawaii. Another love was music, particularly brass music. Joel was a talented brass musician. Joel started playing the euphonium in high school and played in bands and brass groups throughout high school and college. Joel performed at a number of band and brass group reunions over the years, most recently in 2019. Eliot is part of her school's orchestra and choir and this is an email Joel sent to her orchestra teacher after one of her school concerts: “Just wanted to extend my appreciation of the concert last night. I felt everyone was fantastic. I haven't had many joyful moments in the last few years. But last evening's music made me teary at times; it appealed to my skin as music can. It was just beautiful to me. Thank you for your hard work, and your love of kids and music." From almost day one, Joel loved (and almost inexplicably understood) anything mechanical. Big trucks and commercial machinery, motorcycles, and off road vehicles fascinated him. There's a picture of Joel as a very little boy standing on the seat of the Jennings family 3-B Jeep pretending to drive. Over his life Joel had a number of jobs that highlighted his interest in machinery and equipment as well as his curiosity and ability to adapt and quickly learn: • He was the ranger at Glacier View Ranch near Ward, CO, responsible for the general maintenance needs of this youth summer camp and year around retreat facility. It brought together his love of the Colorado mountains and his love of figuring out and fixing things. • For a number of years he worked for Kaiser Technology Group in Brighton, CO, as its one-person, “learn as you go,” IT group. In many ways this was Joel at his best, figuring out how to accomplish something without being taught. He was a “learn by doing” kind of man. • Most recently he worked for many years at Rock & Co. in Brighton, CO, running, maintaining, and moving around all the equipment necessary for its commercial rock and masonry work. Joel loved his time moving big equipment from job-site to job-site across Colorado and beyond. Many who knew Joel appreciated his ability to embrace the quiet and relaxing moments and to engage in meaningful conversations on a variety of topics. Joel was comfortable with silence. Long walks with friends, motorcycle road trips, and Sabbath morning breakfasts with Eliot and his parents were important to Joel and nourished his spirit. Joel also enjoyed a good “coffee meet up.” For many years his coffee meet ups centered on a group that gathered regularly at Starbucks in Brighton, CO. Joel was a morning regular for over 12 years and an occasional “regular” even after he moved from Brighton. Eliot was part of the group on weekends and Joel enjoyed watching her interaction and laughter with the daughters of other coffee “regulars”. Groups conversations ranged from politics, philosophy, parenting, auto and motorcycle maintenance, trucking, road building, and firearms to myriad other topics. Joel was always an active and knowledgeable contributor to the discussions. Survivors include Joel's wife, Delores; Joel's daughter, Eliot; parents, Raymond and Janet of Parker; brother Jay and his husband John Bailey of Portland, Oregon; aunt, Marilyn Fritsch of Denver; and numerous members of Delores' family, including Bella, all of whom treasured Joel. A memorial service will be held at 3:00 p.m., Saturday, June 18, 2022, at Denver South Seventh-Day Adventist Church, 2675 S. Downing St. Denver, CO. In lieu of flowers, consider donating to the Cancer Center Patient Support Fund at the UC Hospital Foundation or to Porter Hospice Foundation.

The family of Joel Dee Jennings created this Life Tributes page to make it easy to share your memories.

Send flowers to the Jennings family.