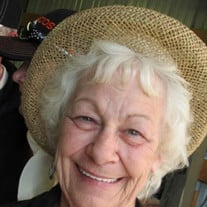 Joan Lynn Rosecrans, 75, of Red Feather Lakes passed away suddenly, July 26, 2019. She was born in North Platte, Nebraska on June 16, 1944, one of six children born to Charles George Ell and Elizabeth Russell. Joan graduated from Wahoo Catholic High School and earned a Bachelors degree from John F. Kennedy College in Wahoo, NE. Joan married Edward Leroy Niebur on September 14,1963 in Wahoo, NE. Ed and Joan had two sons, Edward, Jr. and Scott. Ed Senior was killed in Vietnam in 1968 serving with the United States Navy. Joan later married Richard Rosecrans on January 16, 1982 and they created a blended family with three more children that included John, William, and Carolynn. Joan was an incredibly loving grandmother to Brandon, Kyle, Jonas, Savanah, Charleigh and Ryan. She was also an amazing sister to Chuck, John, Pat, Mary and Kathy. Joan spent over 40 years in the Red Feather Lakes community where she was loved by so many. Joan was a firefighter, EMT, volunteer, friend and confidant to much of the community. Joan was a retired tax accountant and book keeper, and as of late she worked hard helping dogs one knee at a time by making MuttKnee braces for dogs, locally in Red Feather Lakes, Colorado. Joan was a kind and gentle soul. She was a trusted and loyal friend who never quit helping others. A Memorial Service will be held at Morning Star Community Church, 23628 CR 74E, Red Feather Lakes, CO 80545 on Saturday, August 3 at 10:00 am. A reception will follow the service and will be held at the Red Feather Lakes POA at 58 Fire House Ln, Red Feather Lakes, CO 80545. For logistical reasons, please don’t send flowers or physical gifts. Memorial contributions may be made to the Morning Star Community Church in Joan’s name. Visit www.bohlenderfuneralchapel.com to send online condolences and to share your favorite memories of Joan.

The family of Joan L. Rosecrans created this Life Tributes page to make it easy to share your memories.