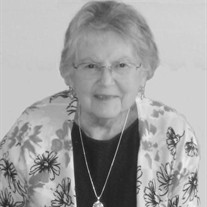 Joan Lorraine Morthole died March 2, 2021 at the age of 92. Born October 5, 1928 to Ralph and Esther (Rousselle) Hardy, she grew up on a farm in Hitchcock County, Nebraska. She attended a one-room school before graduating high school in Wauneta, Nebraska. Joan attended Kearney State Teacher's College (now the University of Nebraska, Kearney.) She was a member of honorary societies Pi Omega Pi and Xi Phi, and sorority Sigma Theta Phi. She was crowned their “Sweetheart” in her senior year. After her graduation, Joan taught high school in Imperial and Trenton, Nebraska. Joan married Gordon Morthole of Culbertson, Nebraska in 1950. Gordon was employed as an insurance investigator for Equifax. They first lived in Scottsbluff, Nebraska and were transferred to Cheyenne before being transferred to Fort Collins, Colorado in 1956 where they remained. Here they raised four children: Sharon, Denise, Janet and Mark. Gordon and Joan celebrated their 53rd anniversary a few days before Gordon died, in 2003. Joan lived alone until 2016 when she moved to The Worthington Independent Living and later Brookdale Senior Living. Throughout her life she kept busy with sewing, crafts, reading, gardening and entertaining with life-long friends. She loved flower gardens and picnics. Gordon and Joan traveled to 49 of the 50 states, New Zealand, Australia, and to Europe several times. One of the last items on her “bucket list” was to see the cherry blossoms in Washington, DC which she did with her granddaughter in 2008. Joan was baptized into the Lord in 1945 and remained faithful until her death. She worshiped with the Meadowlark Church of Christ where, for many years, she taught Bible School, was active in Life Groups and many activities of the church. She was a Camp Fire Girls leader and a volunteer at Poudre Valley Hospital for 21 years. She sewed many lap quilts which she delivered to nursing home patients. Survivors include her 4 children, Sharon Von Gunten (Mike) of Fort Collins, Denise Morthole, Janet Thomas (Richard), Mark Morthole (Jona) of Austin Texas, six grandchildren, Heather Sulgrove, Garrett Von Gunten, Tuscany and Cayman Morthole, Laura and Sophie Thomas, and 4 great-grandchildren. She is also survived by her brother Bob Hardy (Jean) of McCook, Nebraska, and preceded in death by her sister, Elva Brown (Merle). Memorial contributions can be made to the charity of your choice, the Mountain States Children's Home Longmont, or the National Pediatric Cancer Foundation. Footnote: Our mom was a planner and it is in character that she wrote her obituary so that it was correct. She omitted that she was a complex person who was a fun, loyal friend with a good sense of humor and a quick wit. Her memory of people and events never ceased to amaze us and she loved meeting new people. She was always curious and the dictionary and encyclopedia were well worn. She was smart and practical and put a million miles on her sewing machine. Mom believed in making the best of every situation and being a good neighbor and living with integrity were her core values. And she loved picnics-lots of them-rain, snow or shine, picnic table or not. She was loved and will be missed.

Joan Lorraine Morthole died March 2, 2021 at the age of 92. Born October 5, 1928 to Ralph and Esther (Rousselle) Hardy, she grew up on a farm in Hitchcock County, Nebraska. She attended a one-room school before graduating high school in Wauneta,... View Obituary & Service Information

The family of Joan Lorraine Morthole created this Life Tributes page to make it easy to share your memories.

Send flowers to the Morthole family.