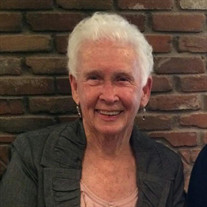 JoAn Estelle Kechter, 80, of Fort Collins Colorado. Passed away peacefully in her sleep July 27th 2017. JoAn passed away do to an illness that she could not overcome. JoAn was born in Fort Collins Colorado on February 5th 1937 to Henry George Franz and Pauline Laura Franz (Woods). JoAn also has a sister, Pauline Jeanette Elton of Colorado Springs (Edward Elton) JoAn and her sister grew up on their parent’s farm which was on the South West corner of Harmony and Timberline which at that time was out in the country. She went to the Harmony School and she went to high school at Fort Collins High school where she graduated in 1955. She met her husband of almost 62 years Kenneth J. Kechter on a blind date, who she married November 20th 1955. JoAn and her husband stayed in Fort Collins where she worked at Ma Bell as an operator for the first part of marriage. JoAn and her husband soon started a family where they finally settled and built their first home where they raised their five children. JoAn had several jobs throughout her lifetime, but was most known for all her unique pets that she had. JoAn is survived by her loving husband, Kenneth J. Kechter. Her five children, Randall F. Kechter, Denise J. Miles (Kevin Miles) Dawnetta M. Mitamura (Jim Mitamura), Rodney K. Kechter (Laurie Kechter) and Reginald A. Kechter. Her eight grand children, Kollette Miles Decker (Dan Decker), Kelli Miles Vaughan (Anthony Vaughan), Nate Miles (Brianna Mazzella), Nikki Kechter Croft (Reuben Croft), Paul Kechter (Jami Kechter) Teresa Kechter, Jacob Kechter and Nicholas Kechter, and her five great grandchildren, Delaney Kechter, Harlow Kechter, Ladan Decker, Dillion Mazzella and Elizabeth Kechter, and her sister, Pauline Jeanette Elton. A Funeral Service will be held on Thursday, August 3, 2017 at 10:30 a.m. at Timberline Church, South Auditorium, 2908 S. Timberline Rd. Graveside Services will be held Thursday, August 3, 2017 at 1:30 p.m., at Grandview Cemetery. In lieu of flowers please make a donation to the Global Missions Foundation, Inc., in care of Bohlender funeral Chapel, 121 W. Olive, Fort Collins, CO 80524 or to any charity of your choice. Thank you.

The family of JoAn Estelle Kechter created this Life Tributes page to make it easy to share your memories.

Send flowers to the Kechter family.