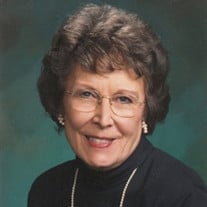 Jo Ann Banister, died June 25, 2019 at the age of 84 in Fort Collins Colorado. Mrs. Banister was born September 14, 1934 in Emporia, Kansas to Charles and Eunice Stine Jacobs. She was the fifth generation to spend her childhood on the family farm southwest of Emporia. Although she lived most of her life in cities, Jo Ann remained a country girl at heart. She graduated from Emporia High School in 1952 and Emporia State University in 1974. Jo Ann married Richard E. Banister, her high school sweetheart, on December 6th 1953. They, along with their three children. lived in Emporia and several other locations in Kansas until 1974 when they moved to Sterling Colorado. An industrious businesswoman, Jo Ann built a career through various business occupations such as bookkeeper, legal secretary, executive secretary, sales manager and realtor before obtaining her bachelor degree in 1974 and launching a career in education. Jo Ann established the Fashion Merchandising and Marketing Program at Northeastern Junior College in Sterling as she continued selling real estate part-time. After moving to Fort Collins in 1980, she taught in the Poudre School District while growing her real estate career until she retired in 1994. Widowed in 1994, Jo Ann was very dedicated to her family. She enjoyed traveling and relaxing in her later years. Jo Ann is survived by a daughter, Marianne Wagonhurst and her husband Robert of Hunt Valley, Maryland, a son Brian Banister and his wife Trish of Fort Collins, son-in-law David Bee, of Fort Collins. five grandchildren; Nicholas Bee and his wife Danielle of Phoenix, Maryland, Audrey Jacobsen and her husband Jesse of Clarkston, Washington, Hillary Wagonhurst of Bozeman, Montana, Ryan Banister and Rachel Banister, both of Fort Collins. She also has two great-grandchildren; Autumn and Maddie Jacobsen of Clarkston, Washington. She is preceded in death by her parents, Charles and Eunice Jacobs, her husband Richard, her daughter Kathleen Bee and her granddaughter Claire Wagonhurst. A Graveside Service will be held on Saturday, July 6th at 10:30 am at Haworth Cemetery near Emporia Kansas. A Celebration of Life will be held July 9th at 11am at Bohlender Funeral Chapel 121 W. Olive Street in Fort Collins. In lieu of flowers, memorial contributions may be made to the Claire Marie Foundation, 100 Shawan Road, #313 Cockeysville, Maryland 21030 or online at www.clairemariefoundation.org.

Jo Ann Banister, died June 25, 2019 at the age of 84 in Fort Collins Colorado. Mrs. Banister was born September 14, 1934 in Emporia, Kansas to Charles and Eunice Stine Jacobs. She was the fifth generation to spend her childhood on the family... View Obituary & Service Information

The family of JoAnn Banister created this Life Tributes page to make it easy to share your memories.

Send flowers to the Banister family.