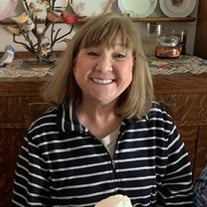 Jill Denise Holsinger, 60, of Larkspur, Colorado passed away peacefully on February 4, 2021 with family by her side. She was born February 22, 1960 in Fairbury, Nebraska to parents Helen and Marvin Magee. Jill grew up in Omaha, Nebraska where she graduated from Burke High School in 1978 and went on to receive her bachelor’s degree in elementary education from the University of Nebraska-Lincoln where she graduated in 1982. She moved to Colorado in the late ‘80s, where she eventually settled down in Larkspur, Colorado. Jill was known for her sense of humor, famous parties, cookies and secret chili recipe. Her home was never short on pets, with every adoption coming in pairs. Everyone and every animal was more than welcome in Jill’s home, no matter what was going on. She was extremely present in anything that involved her two girls. Jill was an active volunteer at Larkspur Elementary School during the fall festival and other events throughout the year. Jill was also heavily involved in her daughters’ Girl Scout troop, eventually becoming a leader — planning meetings, outings, cookies and multiple camps. She will be remembered by friends and family as a kind, loving and wonderful mother, daughter, sister, aunt and friend. Jill is survived by her two daughters: Shelby and Baily Holsinger. She is also survived by her mother, Helen Magee, her two sisters, Deborah Stewart and Lori Magee, her brother, James Magee, and her three nephews, Andrew, Daniel and Sam Stewart. A private family service will be held during the summer.

Jill Denise Holsinger, 60, of Larkspur, Colorado passed away peacefully on February 4, 2021 with family by her side. She was born February 22, 1960 in Fairbury, Nebraska to parents Helen and Marvin Magee. Jill grew up in Omaha, Nebraska... View Obituary & Service Information

The family of Jill Denise Holsinger created this Life Tributes page to make it easy to share your memories.

Send flowers to the Holsinger family.