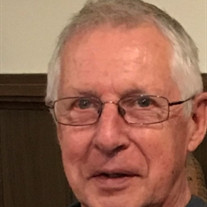 Jerry Reents, 79, of Fort Collins passed away peacefully at home with family on December 28, 2019. Jerry was born January 12, 1940 in Beatrice, Nebraska; the son of William and Alice Reents. He grew up in Nebraska and later his family moved to North Dakota. He graduated from Dickinson High School and attended Dickinson State University where he received a Bachelor's in Elementary Education. Thereafter he received a Master's degree from Chadron State College. Jerry married the love of his life, Annette (Ellefson) Reents, August 12, 1961. They lived in South Dakota before moving to Fort Collins in 1969 where they raised four children: three daughters and one son. Jerry was a beloved and dedicated teacher. He taught for 30 years at Bennett Elementary, where he was also the Vice Principal. Jerry was the epitome of a family man. He loved spending time with his family in the outdoors; boating, fishing and camping. Jerry was a man of great faith, which came through in all aspects of his life. His children, grandchildren and great-grandchildren all know that one of the greatest investments you can make in this life is through teaching the next generations faith in his Lord and Savior Jesus Christ and to pray for their family and friends. Jerry knew when he left this world his prayers had been heard and answered by God. And God will continue answering them long after Jerry is in Heaven. Jerry is survived by his wife of 58 years, Annette Reents; sister, Sally (Doug) Merle; sister-in-law, Susan Reents; three daughters: Shelly (Bud) Blazier, Lisa (Cory) Sanders, Susan (Walter) Santistevan; son, Shaun (Vicky) Reents; eleven grandchildren; and nine great-grandchildren. He is preceded in death by his parents and brother, William Reents. PSALM 71:18 Now that I am old and gray, do not abandon me, O God, let me proclaim your power to his new generation, your mighty miracles, to all who come after me. In lieu of flowers the family would kindly ask for donations to charities close to their hearts: The Alzheimer's Association https://www.alz.org/, Pathways of Northern Colorado https://pathways-care.org/ways-to-give/, American Diabetes Association/Rocky Mountain Area https://www.diabetes.org/community/local-offices/colorado

Jerry Reents, 79, of Fort Collins passed away peacefully at home with family on December 28, 2019. Jerry was born January 12, 1940 in Beatrice, Nebraska; the son of William and Alice Reents. He grew up in Nebraska and later his family moved... View Obituary & Service Information

The family of Jerry Bruce Reents created this Life Tributes page to make it easy to share your memories.

Jerry Reents, 79, of Fort Collins passed away peacefully at home...

Send flowers to the Reents family.